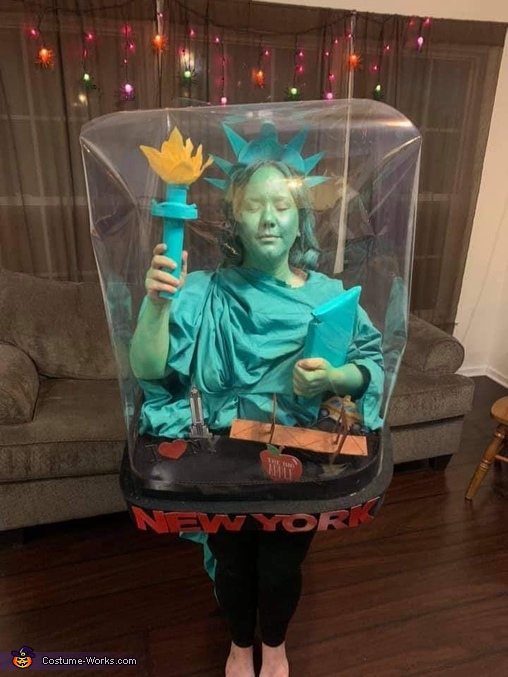 A word from Jennifer, the 'NY Snowglobe' costume creator:

I got the idea after seeing something very similar. Here is how I made it and what I used.
I got a piece of foam from a craft store. The center was cut out so that it would sit on my hips. The corners were rounded and then the whole thing was spray painted.
After it dried I used a box cutter to cut slit around the circumference. Then I took a long piece of cardboard that is the same amount as the circumference. I shoved it into the slit I cut so I could measure it properly. One it fit, I glued it together. Once I had that done I stapled the acetate onto the ring of cardboard. I left a little overlap then I cut the acetate. Once the acetate was stapled to the cardboard ring, I tucked it into the slot. On each corner of the acetate at the top, I cut straight down then I folded each piece over and glued it down so the top was closed. I cut off the excess. Once that top was glued closed I glued the cardboard ring into place in the slit I cut. I printed out the taxi, empire state building, i love NY and big apple. I glued tooth picks on and then stuck those into the foam base. I made the Brooklyn bridge out of cardboard and painted it. I also used toothpicks to secure it in place. for the Statue of liberty toga, I used a sheet. I glued it together to create the look of it being draped. I cut out the crown shapes and glue them to a head band. I made the table out of a box and printed the inscription on paper and glued that onto the font of the tablet. I made the flames out of fake flowers that I took apart and glued together. I made the torch handle from a container my essential oils came in and i just covered it in the colored paper and glued the flames to the top. I pined my hair up like lady Liberty and then painted myself and hair to look like her.