The Nightmare Before Christmas
by Jennifer

The Nightmare Before Christmas
by Ian

Nightmare Before Christmas
by Amy 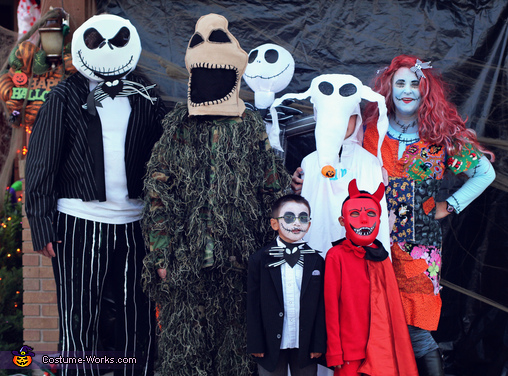 A word from Susan, the 'Nightmare Before Christmas Family' costume creator:

Husband is Jack Skellington: I made his jacket from a pattern, I bought the sweat pants at Goodwill and used fabric paint to paint the stripes, and made the bow tie from black foam sheets and white puff paint. I made the mask from a Styrofoam ring covered with white felt and then I took a big piece of white foam paper and drew the face on with a Sharpie. I then cut out the eyes and glued black lace to the back! My youngest son was Jack Jr. I made his bow tie with black foam paper and puff paint. I painted his face like Jack. We purchased the clothing from Goodwill! My oldest son was the Boogeyman. The costume is a ghillie suit. I made the mask by hand by drawing my own pattern and sewing it. Then I used black pipe cleaners to make it look like huge stitches. I cut out the eyes and glued black lace behind them and also behind the mouth. I stuffed the top of the head with fabric stuffing. My daughter was the dog Zero. The main costume is a sheet bought at Goodill, cut with a hole in top to make a cape. Then she wore a white zip up hoodie and I sewed the head directly onto the hood and used ribbons to hold it in place. I made the huge head by drawing a pattern of the face, cutting it out and sewing it and stuffing it. I painted the eyes on with black fabric paint. I took a jack o' lantern light from a strand of Halloween lights and attached it as a nose using wire. The ears are made from white felt and I lined the perimeter of each ear with wire, then glued 2 pieces together and sewed to the head. This gave the ears a nice flow in the wind! I (Mom) was Sally. I bought a big nightgown/nightshirt at Walmart. I cut the sleeves off and used a pattern to make new sleeves and sewed them to the nightgown. I took scrap pieces of fabric, with both Halloween and Christmas themes and glued them onto the nightshirt with a glue gun. I bought the light blue shirt at Goodwill, cut the top of the neck and the bottom of the sleeves and added the stitches with a black fabric marker. I couldn't find a red wig a liked so I bought a blonde/white wig and painted it with red and burgundy hair paint. I added the little hair clips that were bought at a Halloween store. I painted my face with Snazaroo face paint and eyeliners and eyeshadow. My middle son was the boy who dressed up as a devil in the show. I bought a red outfit at Goodwill, then added a cape that was red. I bought the plastic mask which was solid red. I used a black Sharpie and white chalk paint to draw the face on to make it look like the mask in the movie. I bought the devil horn headband but it had sequins so I glued on red foam paper to the horns to make it look more masculine. I also did the same with the bow tie, covering the sequins. We had a blast!