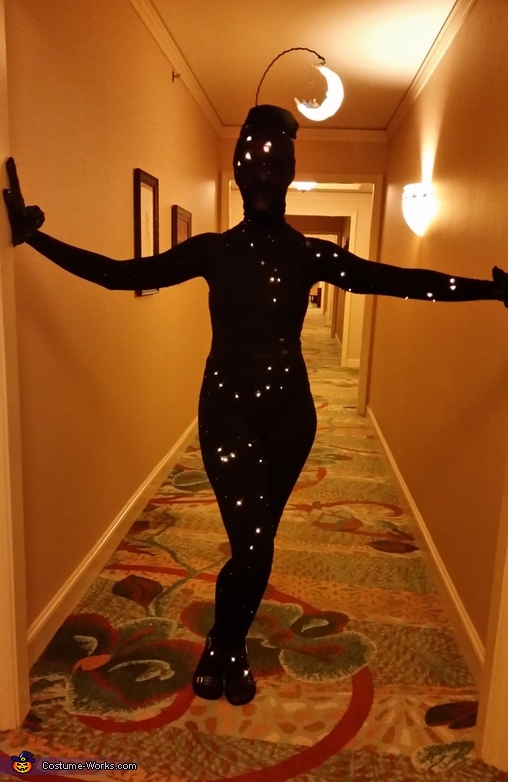 This homemade costume for women entered our 2016 Halloween Costume Contest, in the Coolest Adult Costume nomination!

A word from Denise, the 'Night Sky' costume creator:

This year I decided I wanted to embody the Night Sky, with all its depth of light and omnipresence. I often like to create conceptual costumes, rather than specific characters, as this gives me more room for creativity.

What turned out to be one of the most important parts of the costume was creating it so that, although the form of my body was visible, there was no way to identify me. Every inch of my body was covered in black, and bespeckled with different tones of crystal glass beads that reflected whatever light was around me. I wore battery powered LED fairy lights under just the right weight of fabric so they twinkled through (which I secured with medical tape onto my skin!). When asked where I hid the battery packs I always answered with, “Battery packs!? What battery packs? Stars aren't powered by batteries!”
I sewed a mask from black nylons,and made sleeves to go under a sleeveless bodysuit by cutting the crotch out of a pair of nylons, and wearing them over my head. I added a turtleneck to the bodysuit out of scrap nylons, and thin socks (which I also made from the same pair that I had cut the mask from). I wore thin leggings under the bodysuit, and I purchased theatrical black gloves. It took me several days to sew the sparkly beads on each piece of the costume.

A night sky must have a moon and a moon must have archetypal dreaming lovers perched on it; and so I designed a pillbox style hat that would add to the sparse but stylized look. I actually used some black bra inserts that I had lying around my closet to create the hat, then firmed the shape with thick steel wire, and attached the moon. I created the moon out of several layers of fabric and wire and more fairy lights. I sculpted the couple out of lightweight foam clay and painted them, even adding pearl jewelry to the woman’s outfit. I design all of my costumes so that I can dance and move around freely, and so an elastic held it firmly to my head while the moon bobbed around, with the illusion of it floating over my right shoulder.

From the minute I emerged at each the event I attended to the very end of the night I got constant compliments, and a lot of people pointing and whispering how great my costume was that didn’t know I was watching them through the mask. The anonymity was incredibly powerful, and to offset the spook factor of me not having a face I would respond with a mischievous wave that made most folks giggle nervously. A few friends couldn’t place my voice and I had a lot of fun keeping my identity secret and listening in to the compliments. (Only when bright light was shined in my direction could my face be seen, but in photos I almost disappeared into the Night!). I was asked to pose in so many pictures I felt like I had my own paparazzi and I had to decline several photos in order to get to one of the contests in time! Overall the costume had a much broader reception than I had initially expected and I was very pleased to win 1st place in one and 5th in the other. (My winnings more than covered the $100 plus cost for materials!). My favorite compliment was from a woman who came up to me, looked me square in the starry face, (even thought she couldn’t see me), and said, “This is the best costume I have EVER seen and I’m 72 years old so that’s saying A LOT!”