Neo from The Matrix Costume 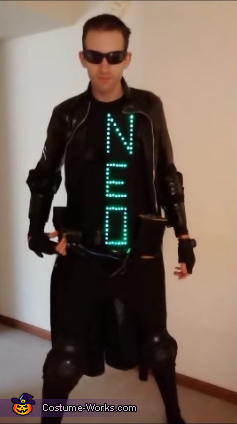 Neo from the Matrix - Neo

A word from Casey, the 'Neo from The Matrix' costume creator:

I would first like to thank you for hosting this event which not only allows, but inspires, people to embrace their creative side and strive for innovation.

This costume was worn by myself, Casey Fangmann. The costume was first inspired by Taylor Swift's Bad Blood music video (www.youtube.com/watch?v=QcIy9NiNbmo). The video has a very dark, deadly, futuristic feel. I had concert tickets to the Taylor Swift show on September 29th and wanted to dress up because she encourages her fans to be unique and creative.

As I was looking for supplies to make my costume, I came across several Matrix style costumes, and that's when I knew what I would do for Halloween. However, I like to apply my own interpretation and innovation to common costumes, so that’s how I came up with the costume that I submitted for this contest.

Unfortunately, when I went to the Taylor Swift concert with this costume (containing Taylor Swift programming, not Matrix programming), the Scottrade Center did not embrace my innovation and creativity. In fact, I was humiliated by their discrimination against me. I was first approached by the security officers and told that I would not be allowed into the concert because of my “set up,” despite explaining to them that it was simply a LED display and offering it for inspection. After being confronted by the security officers, I was then confronted by police officers who had what I believe to be a bomb sniffing dog, and was treated like a criminal.

I very politely tried to explain to them that I had created my own LED display for the concert, but they would not hear me out, and beyond telling me that I wouldn’t be allowed in the concert, I was told that I needed to leave the premises immediately. I could not have been more humiliated. I had taken the initiative to teach myself new skills, build and program something innovative, and my reward was being treated like a criminal. Furthermore, I watched as dozens of other lighted displays were allowed into the concert venue that evening. I definitely feel that as a male attending a Taylor Swift concert alone, that I was singled out and discriminated against. Every Taylor Swift fan that I talked to was outraged at the treatment that I faced, and they were all amazed at the costume and lighted display that I designed. In fact, my treatment led to an article being published in the St. Louis Post. If you are interested, you can read more here: https://www.stltoday.com/news/local/metro/bad-blood-between-taylor-swift-superfan-scottrade-security-over-costume/article_e3fda65a-1937-57f1-aabc-3dad539112d5.html

So after that entire ordeal, I questioned if I should dress up for Halloween at all. After a few weeks to think it over, I eventually came to the conclusion that instead of letting this situation define me, that I would stand up for my creativity and curiosity to learn and try new things. I wanted to stand up for people, especially young, who have a passion to be unique, creative, and innovative. I want them to know that even though they will be faced with challenges and potential discrimination, that they shouldn't let these obstacles define their path in life. For young minds which are so easily shaped by the opinions of others, who are at risk for changing their entire life path from an event like this, I want to encourage them to be strong and pursue their passion despite what their critics say.

So I refocused myself and came up with the 4 new designs included in the pictures, as well as additional designs shown in the Facebook video that I provided a link to. I nervously went out to celebrate Halloween, fearing another experience similar to what I faced at the Scottrade Center, but I was gratefully surprised that not only was I not criminalized, but I was enthusiastically embraced. Over 100 complete strangers complemented me on my costume as I walked around town. No one treated me like I had a bomb. Everyone was so amazed at the Matrix style costumed I created with the LED display that I programmed.

In addition, every single establishment that I entered let me in without question. They didn’t call the police or even bat an eye at my “set up.” They all just commented at how cool they thought my costume was. This embrace felt incredible, and translated into winning 5 different costume contests. I was lucky enough to receive 1st, 2nd, 3rd, 3rd, and 5th in the contests I entered, but I was just happy to see people’s eyes light up at the innovation and creativity I showed, and I believe I inspired people to try something unique themselves. I hope Costume Works sees and embraces the creativity and innovation I have created, and if I am lucky, hopefully it will place me among the top costumes for 2015.

The details of my costume are as follows: I got the spandex suit and trench coat online. The gloves, sunglasses, and usb cables were items that I had lying around my apartment. And I got the belt, the book covers, the knee pads, and the elbow pads at the local Goodwill. The housings for the microcontroller and battery pack were just cardboard boxes that I covered in black electrical tape. I made the harness out of some Velcro straps.

I also purchased a 5 meter roll of programmable lights, some wires with pin connectors, an Arduino microcontroller, push button controls, and a battery pack for the LED display. With friends, Youtube, and online forums as my guide, I spent nearly two months teaching myself how to safely wire the portable lighted display and program customizable designs onto the display. The overall cost of this costume was about $100 dollars, with most of that cost coming from the electronics, but the great thing is that I will be able to use that display for hundreds of other purposes. Now that I have learned these skills, all of my friends are asking me to program displays for them. This Halloween has really helped me learn a skill I can use the rest of my life.

Here are some useful tips I would share with anyone looking to do a similar costume. If you cut a hole in book covers, you can actually use them as shoe covers (I did not have a pair of black shoes). I also used a book cover to cover my LED lighted display so that it would look like one cohesive display instead of 10 individual LED strips glued to a piece of cardboard (which is all it was!). I made the harness using Velcro straps: one horizontally around my chest, and one vertically over each shoulder, which connected to the back of the LED display. This allowed me to wear the display instead of having to carry it. I also wrapped the individual wires (from the microcontroller to the individual LED strips) in black electrical tape to keep them bundled together. Also, by adding push buttons, it allows you to manually sequence forward and backward through different designs so that you do not have to just let all of the sequences play through without any control. The trench coat also came in handy because it rained on each of the nights I wore it out, and the rubber/plastic material kept me and the LED display dry. I would recommend using grid paper when you are ready to program your lights. This will make it easier to program which lights need to be turned on. Finally, make sure to choose a portable battery pack with two usb ports, one for the LED power, and one for the microcontroller power.

I would like to request to be considered for the “Most Creative Costume” category as well as the “Coolest Adult Costume.” Thank you again for your consideration and please let me know if you have any questions.