The Muppets Family
by Lori 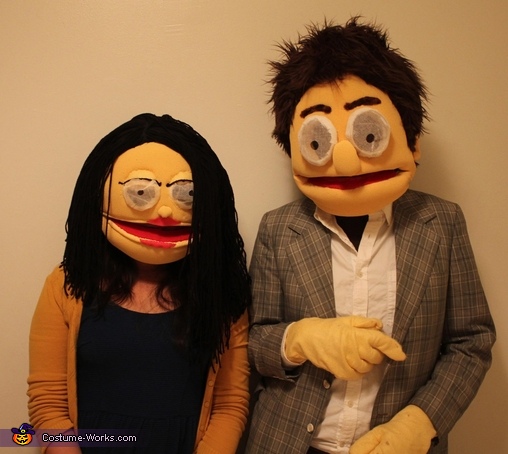 A word from Rob, the 'Muppet Couple' costume creator:

My girlfriend Gem and I are avid Halloween costumers, and always have some big elaborate costumes we scramble to do at the last minute. For years, we've talked about doing Muppet versions of ourselves that we could wear and be ridiculous in, heckling people Statler and Waldorf style. It always seemed like too much of an undertaking, but we finally pulled it off!
While the costume was very elaborate, it was light and had a working jaw that you can eat/drink with, which is always useful for various holiday parties and dinners. Between the ears, mouth, and mesh eyes, it also breathed surprisingly well (the felt gloves less so).


CONSTRUCTION:
There were gloves and accessories for these, but the main thing was the head.
—There's a wire frame at the center of both of them that attaches to a (cushioned) wire headband. There's the head shape, and a hinged jaw. Similar to past costumes, we used a green "DAND-O-LINE" anchor wire from the hardware store. It's malleable, but thick enough to hold it's shape, and a rubber coating keeps it from scratching too much.
—An elastic band attaches the main head to the jaw. It pulls the jaw shut when your chin isn't pushing it open.
—A layer of mattress/cushion foam was used for the "skin". Attached with sewing and zip ties (quicker, but less nice looking. For concealed areas.) The eyes, ears, and lips were similarly molded out of the foam and attached. After which, the whole thing is spray painted to give it a smooth, even coat. Once painted, the foam has a texture that looks like felt.
—The mouths are lined with felt for detail.
—The hair and eyebrows are faux fur for one (managed to find a fur that looks EXACTLY like my hair), and yarn and pipe-cleaners on the other.
—The eyes are molded out of a white mesh. Gem's has some foam eyelids built into the structure to give it a different shape (she's more mellow than I am). The black pupil drawn on to each one with a marker is surprisingly the easiest area to see out of.