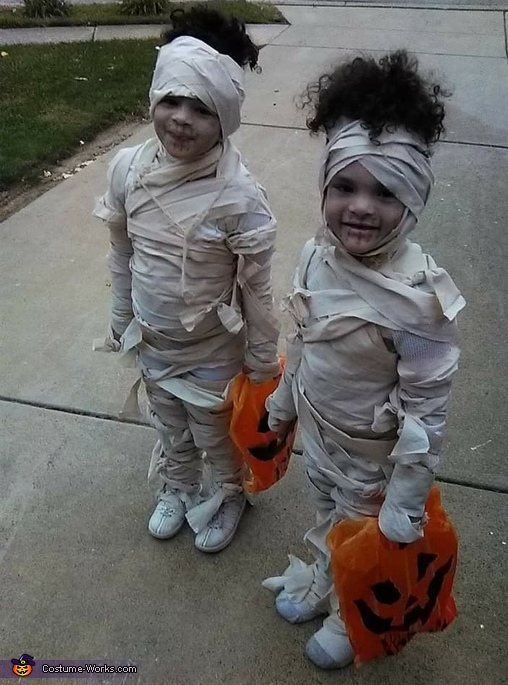 A word from Zoraida, the 'Mummy's Twins' costume creator:

I've always enjoyed making homemade costumes! However, this particular costume year had been financially draining, to say the least. So, I had to get creative! Cheap! Easy! Quick!
I had to design 2 costumes on a non existent budget. I put on my thinking cap and googled a lil pinterest inspiration and ta-daaaaa! Mummy's Twins!
Even though my girls resemble twins they are actually 2 yrs apart. 6 & 8yrs old. Perfect for a double costume with limited materials!

I had an old king sized white-ish sheet.
I had scissors
I had tea bags.
I had large pot.
I had old white-ish clothes/shoes.
I had makeup. (my own personal foundation, eyeliner, powder)

I boiled about 5 tea bags in a large pot until I got a nice dark brown color.
(This gives the sheet an old weathered look)
I cut long jagged strips of the sheet and placed them in the pot.
Turn the heat down to low and let the strips sit til you achieve your desired color. Remove and let air dry.

I puth them in some old white clothes and shoes. However I only had one white pair. I needed 2. So, I used an old pair of sock to cover her shoes. Problem solved!
Then I started the process of individually wrapping my kids up in strips of sheets. Very random patterns. Tying in some spots to exaggerate the weathered look.
Once all wrapped up I applied my foundation and powder to their face. Drew the dark circles and detail shading with a black eyeliner.
My skin tone is way lighter than theirs so already having this make up as an option without additional $ was great!
Poofy messy hair & DONE!
I would say my total cost would have been only for the tea bags! $1 for 2 super spooky costumes! They were the talk of the neighborhood!!