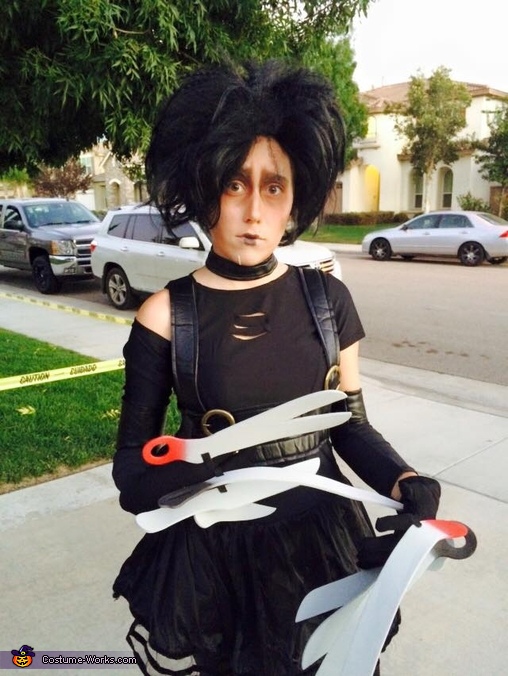 A word from Kaitlyn, the 'Ms. Edward Scissorhands' costume creator:

I am wearing the costume! The idea came from, obviously, the movie Edward Scissorhands, which is one of my favorite movies. I am utterly obsessed with Tim Burton and Johnny Depp so it was really fun to try this look. Not only do I love the movie, but I also love Edward's character. He is the opposite of what he appears to be; a kind, gentle soul. All throughout Halloween night, I walked, talked, and even smiled like Edward. It was really amazing to act like such a unique and complex character!

Makeup Instructions-Becoming Edward:
1. Create scars out of toilet paper and liquid latex; apply to face
2. Apply a liquid foundation two or three shades lighter than your skin tone all over your face and neck
3. Apply brown bronzer to contour your cheekbones for a "sunken in" appearance and on the insides of your nose to slim it. Also brush bronzer along your hairline and chin
4. Cover eyebrows with a concealer or paint
5. Apply dark (brown or black.. I used both) eyeshadow to inner corner of eye, sweep upward, and out, like a triangle
6. Apply a lighter brown eyeshadow under your eye to create faux bags
7. Apply a black lipstick to inner part of top and bottom lip

The scissorhands, wig, and dress came in a costume packet that I purchased from Amazon for a discounted price of $40. I also had a wig cap that I used previously for another costume to tuck in my thick hair. This makes it SO much easier to put on the wig and I highly suggest it. The black skinny jeans and black studded boots are my own.

Overall, I had a lot of fun with this costume and highly suggest trying it out to anyone who loves Edward Scissorhands as much as I do!