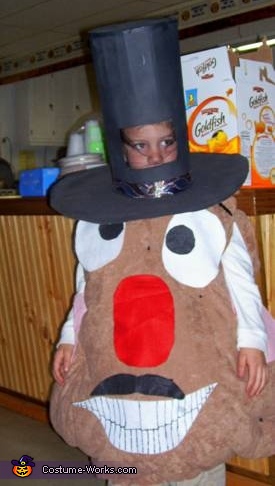 This is Eric as Mr. Potato Head. Eric's costume, created by Mom, Donna, is, what one might today call "interactive".
This Potato Head comes with 2-3 changable face parts in a secret pocket and held on with Velcro for an easy switch.

This homemade costume for kids entered our 2010 Halloween Costume Contest.

Here is our son (Eric) in his "Mr. Potato Head" costume ! He was 5 y.o. when I made this costume for him. We live in Upstate NY where it has been known to snow on Halloween so when I make a costume I have to keep that in mind. basically this costume is kind of like a sleeping bag (that you can walk in lol) I didn't have a pattern of any kind I just kind of cut it into a potato shape. I found some fabric that I thought look like an Idaho Russet potato. I think I bought 10 yards only because I didn't know what I was doing ;-) and I didn't know how much fabric I would need (I had a lot of left over fabric) I sewed 2 sides together and stuffed it with pillow stuffing until it looked just right. Repeated for the other side. So I now had a front and a back I sewed the 2 sides together leaving space for head, arms and legs, I left the bottom completely open so he could walk and go up and down steps. I made a pouch in the back (just like the real toy) to hold his extra 'face' parts. Yes he is an interactive costume you can change his face :-) He put it on just like a T-shirt.

He had 2 sets of ears, 3 moustaches, 3 mouths, 3 noses, and 3 sets of eyes. The face parts were held on with Velcro. I painted the eye brows on with black fabric paint. The face parts were made out of felt or craft foam. I also took a needle and thread and sewed dimples into the costume for a more potato look. I then colored over the dimples with black fabric paint to look more real.

For the top hat I used 2 black pieces of poster board. I rolled one, then I made sure it would fit over his head. I felt where his nose was took it off then cut the opening so he could see. I did put some black tulle over the opening, so it blended in a bit. I took the other piece of poster board and cut a huge circle and that part sat on his shoulders.

If you look closely you can see the ribbon I used to tie the pouch closed in the back (remember the pouch holds the spare face pieces) I also thought it would be fun to give him a tater tattoo (Idaho spud !) creative license and all that. lol

He wore a white turtle neck underneath the costume and was toasty warm all night long. His costume was a big hit, because everyone remembers Mr potato head. A lot of people liked the idea that you could change the face just like the real toy !!!! For his trick or treat bag I took some Burlap and made him a potato sack I looked online to find an old potato sack picture to keep it all real. His costume was a huge hit and his little cousin is wearing it now and it will be handed down to her little brother in a few years. I hope you enjoyed our Homemade costume.