The NEW Mr. Peanut
by Stephen 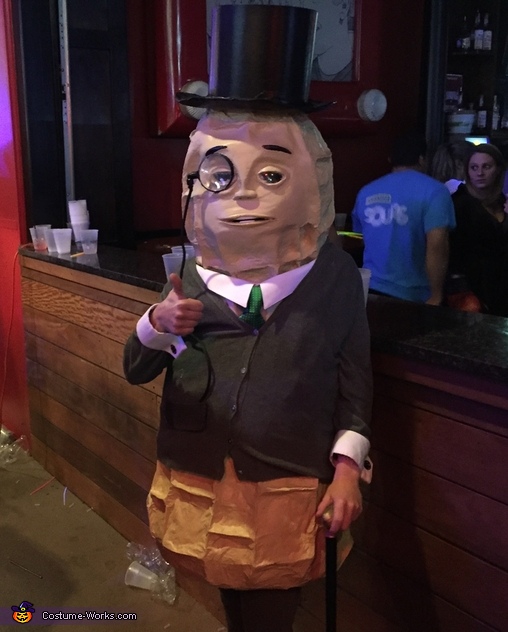 And finally, Mr. Peanut is enjoying a night out in Baltimore city.

A word from Ed, the 'Mr. Peanut' costume creator:

My friend, Corbin is wearing the costume. And it was her idea, but she had no idea how to go about creating a 6' peanut... It's a 2 piece costume and the seam is covered by, Mr. Peanuts sweater. I constructed him using, chicken wire, papier mache, papier clay(used on the face to keep it smooth and to make it look like it's popping out of his shell) latex paints were mixed to give me the perfect peanut color. The square sections of the peanut were made by folding paper in strips and taping them in place until I could get the papier mache on them. Inside the head of Mr. Peanuts a hard hat, which stopped the head from moving around, as it just sits on her head... Mr. Peanuts eyes are cut from a plastic water bottle and then fitted... His Monocle is made from the lid of a stacking potato chip brand (prin*les).. His cane was made using an old pool stick and I just carved out a piece of poplar to look like a peanut... Shoes were purchased at a thrift store and the white was then painted on.. Monocle string is attached using a plumbing fitting and epoxy and then I just epoxied a 1/4" piece of rope into it... Overall cost was approximately 60-65 dollars and most of that being paint colors.