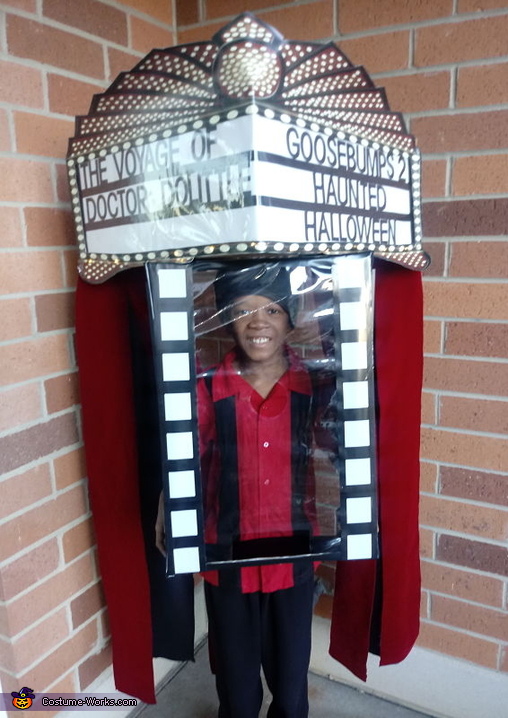 A word from Angela, the 'Movie Theatre' costume creator:

My son, Jordyn, thought it would be cool to be a movie theatre because he knows that l like a challenge when making costumes and to be original. I started with a box for the ticket booth and taped clear vinyl to the box then cut a hole and square into it with an exacto knife to make it look like a ticket booth. I also added plastic film strip decorations to the sides. I then built everything else onto the base of the ticket booth. I lamented two pictures l printed out and used plastic frames l got from Dollar Tree. I added black material to the sides of the box to cover up the cardboard then used twin stick tape to add the posters to the side for a premiere look. For the top l cut a trifold poster board in half and taped it together for a triangle effect. I then used an old banner l had from a previous party, cut out the middle with an exacto knife, and added my own middle section. l made the middle by using the back of gift wrap paper that l already had and black electrical tape and stick-on letters. I taped everything to the triangle base l made, then attached the top base with twin stick tape. I cut out red and black strips of fabric and added it to both sides with tape for the curtain entrance look. I added battery operated lights with clear tape to the sides of the posters and around the top of the sign. The battery along with extra lights not used was hidden in the back of the sign and taped down. The cost for materials that l didn't already have was about $25.00