Deer Head over the Fireplace
by Whitney

Deer Over the Mantle
by Brandi 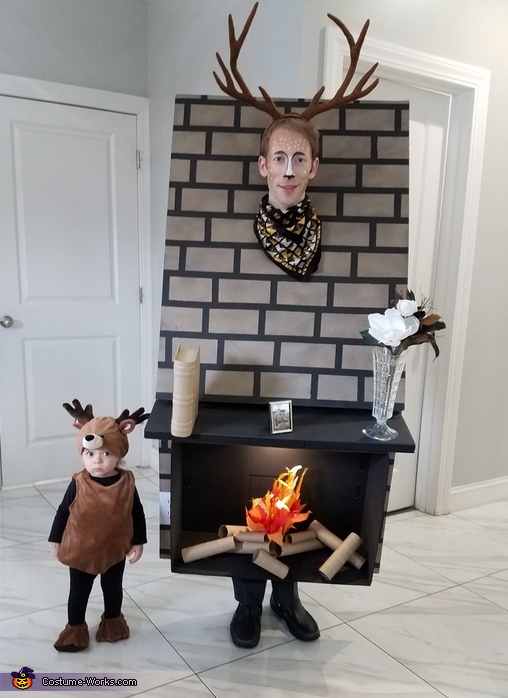 My daughter was a deer

I made this costume for myself to wear. I have no particular obsession with stuffed animal heads; I just wanted to wear the most annoying and cumbersome costume! I had the idea for a mounted head but I thought it would be impossible to do. I searched around online, and I found someone on this website who had done something similar, so that gave me the confidence to go ahead with this idea :)

The wall is made out of black foam board, purchased at Michael's (framing department). I used masking tape to make the lines between the bricks, and I used a stone-textured spray paint to make the bricks. I peeled off the tape and I had a brick wall!
The fireplace was made out of a spray-painted cardboard box. I bought a rechargeable 3-inch fan on Amazon and taped strips of tissue paper to it to make a dancing fire, and I attached a little disc-shaped LED light (Loew's Home Improvement) to the inside (top) of the fireplace to light up the "fire". I used toilet paper and paper towel rolls for the logs, and I used a glue gun to hold everything in place. The whole fireplace is glued to the wall with craft glue.
The mantelpiece is made out of Styrofoam that I painted black, with another piece of the black foam board glued on top.
The cardboard book is from Michael's. The frame is from Michael's, and there's a tiny picture of a hunter with his kill in the frame. The vase is from eBay, the faux flower is from Walmart, and there's actually a peacock feather in there too, from Michael's. There's a little electrical outlet (sticker from eBay) on the wall, on the right side of the fireplace.
The wall is actually made of two pieces, connected by two-inch Velcro. The fireplace part was removable.
The antlers were from Amazon and the face paint was done by the wife.