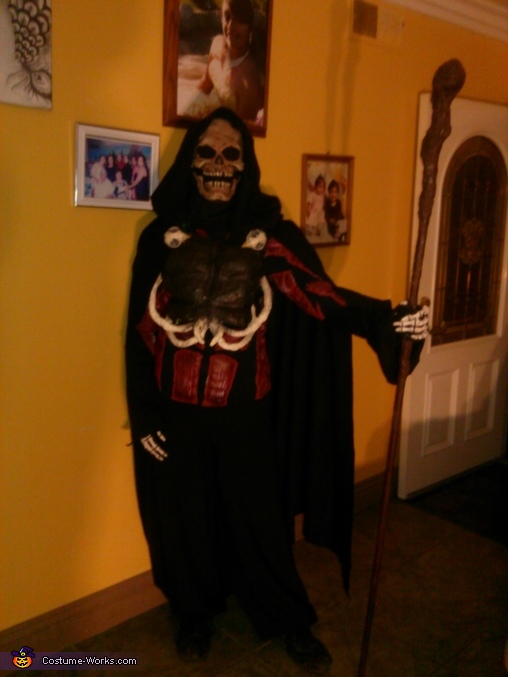 A word from Cynthia, the 'Mors the Retriever' costume creator:

Mors the Retriever is a supernatural being that works alongside Death. He retrieves both the saved, as well as the corrupted. His mission, to collect the lost souls, and find those who may be causing chaos, to receive final judgement. He has a special staff that can be transformed into any weapon he so desires.

Based on a character I have designed, loosely based on my boy friend after not having seen him since early middle school. Years later, I would be reunited with him, in which he arrived one Halloween night wearing a skull mask. So now, this year he nw wears, the character I have originally envisioned him.

Very piece of the costume, was hand made, with the exception of some items used as a base. From the "muscle" exposed skin, in which I carefully referenced to be anatomically correct. The chest piece, built on a child's chest plate, using news paper for the structure, reinforcing with painters tape, and lastly covering with plaster of Paris cloth strips.

The same technique was used to make the staff. His cloak was also hand made, using basic templates to cut and sew. The owl skull pieces, were hand sculpted out of polymer clay, and later oven baked.