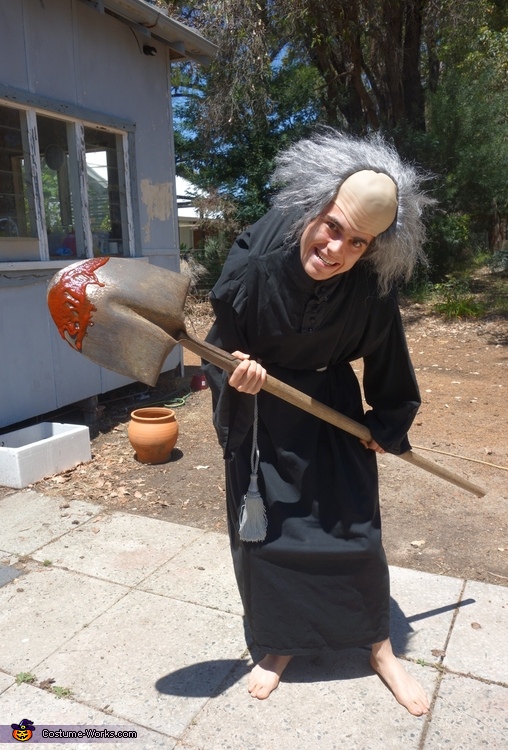 Mord quite enjoys...digging up things, late at night.

A word from Isaac, the 'Mord' costume creator:

I made the costume from a series of different props to act as the dark hunchback, Mord, for a play called "The Creature Creeps." He is secretive, cruel, and dark. He enjoys the unease he brings. For Mord, any time is a good time to make people be concerned bout grave digging, destroying maid servants, and the butterfly collection in the cellar. I wore the costume with a hunch, a deranged grin, and a half-dead leg. I created this outfit by throwing together odd bits and bobs. I used a shovel bloodied with tomato juice as a prop, a pillow was used for the hunch, (strapped around my neck,) a prof. Brown-style bald wig, a black robe, and a silver curtain rope, which was tied around my waist. When dressed as Mord, it is always important to make menacing gestures, use a deep, scratchy voice, and to make everything sound menacing. "Such a lovely steak you have there. Such soft, little bones." "I quite enjoy...digging things up...in the middle of the night." "Did you want to scan your rewards card...?"

Reactions varied. Kids cried, A customer gave me half his shopping in gratitude of scaring him shitless, and the cleaner had a rush of freight and dropped his mop as I was leaving for tea break. I had customers asking for photos, though I had to remove the bald wig twice to stop kids from wanting to hide behind their parents. Not to mention the sheer number of customers who I frightened because they didn't see me until they were face-to-face with me. I won a $50 gift card on top, for the best halloween outfit, which was a competition out of both staff and customers.

The greatest part for me was role-playing my character. I scared the actors during rehearsals for the play. I frightened the audience during the play. I unnerved my co-workers, and terrified the customers, and on the evening, i had a terrific time scaring everyone.