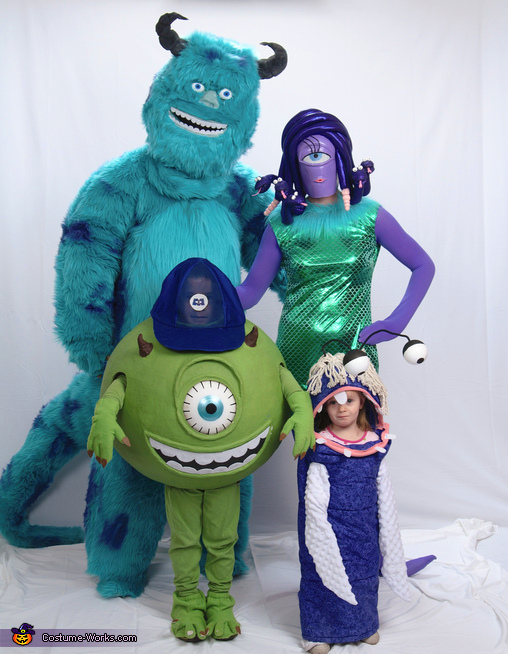 This homemade costume for families entered our 2013 Halloween Costume Contest, in the Best Family Costume nomination!

A word from Bobbi, the 'Monsters Inc Family' costume creator:

I started on these costumes at the beginning of September. I got the idea when my 2 year old started screaming and I half expected the lights to start flickering because she sounded just like Boo from the movie. That's when I figured my 7 year old was the perfect size for "Mike Wazowski", my 2 year old was perfect for "Boo". So naturally I would be "Celia" and my husband "Sully".
I started on "Mike" by doing paper mache around a giant weather balloon I found on Amazon. The eye is a Hamster ball that we cut in half and heated up the edges so they could be bent back to give a surface to glue it on, then just painted the inside.
"Boo's" costume was probably the easiest by comparison. I just sewed the fabric into 2 rectangles and put them together with batting in the middle, then sewed lines across the middle to create the puffy look. Then I just cut holes where I needed to sew the arms in. I used a mop head for the hair and styrofoam balls for the eyes.
"Celia" was more difficult. My husband actually made a mold of the head with clay, then got a negative with plaster of paris, then used liquid latex to form the mask. I used spandex to sew tubes and stuffed them with batting and wire for the snake hair. The heads are styrofoam eggs with slits cut out for the mouths and small styrofoam balls for eyes.
My husband made his own costume. We got a lion pattern from the fabric store, then modified it to fit "Sully" better and added a big tail. For the head he filled and garbage bag with expandable foam and allowed it to expand and dry. He then carved the shape of the head with an electric bread knife and glued the fabric on with eyes and horns.
We were the hit of the neighborhood. We had a lot of fun making these but it was definitely a lot of work.