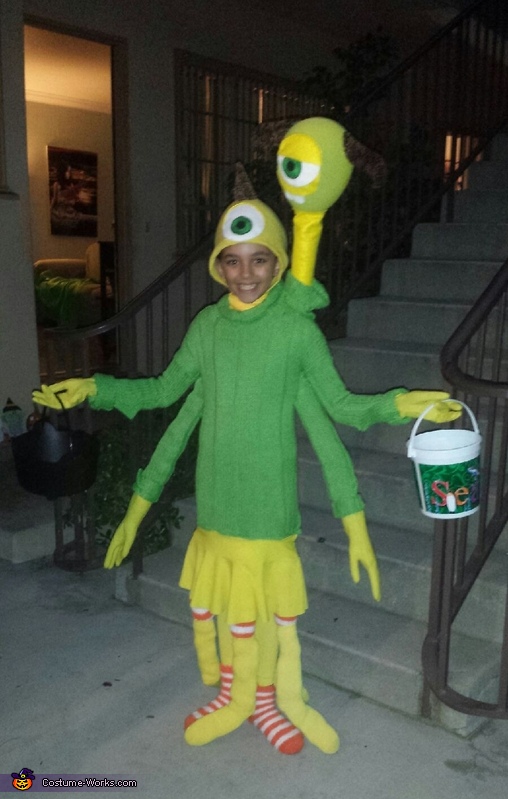 Two heads are better than 1!

A word from Candyjo, the 'Monsters University Terry and Terri' costume creator:

Our family loves Monsters University, this year when the discussion of what to wear for Halloween came up, my daughter Essence came up with the idea of Terry and Terri. I’m pretty crafty, and love the challenge of an unusual costume, one that you have to make because they don’t make it at the costume store. This one was a challenge. I agreed to make it because I immediately thought that a balloon attached to the end of a paper towel roll just might make the perfect 2nd head, and extra legs could easily be achieved with a few pair of stripped tights. My first idea for the 2 necked 4 armed sweater was to buy 2 identical sweaters and trim the neck and sleeves off one and attach them to the other. Finding 2 of the exact same green knit sweater at the local thrift store was not fruitful. I ended up buying 2 sweaters that were closest in color, but not in texture. My creative brain got locked at this point, I really liked one of the sweaters, but it was a little shorter than my daughter felt comfortable with wearing, and the arms were extremely long. I had her try it on again for me and I started thinking about altering it. Turned out that I was able to run a seam through the middle of the sleeve, and make an extra sleeve with the excess material, I also used the excess length off of one sleeve and attached to the shoulder and make the second neck opening. Feeling good about that idea I moved on. For the head I used a yellow balloon and attached it to the top of a paper towel roll with a string that ran through the center of the roll and taped to the outside of the opposite end of the roll for tension. I made the eyes, horns, and covered the neck with felt. I attached the eyes and horns with hot glue, slightly cooled before applying to the balloon so it wouldn’t pop from hot glue melting the rubber. The weight of the felt made the balloon tip, and I stabilized it with clear tape to the top of the paper towel roll. The 4 fingered hands were made from yellow kitchen gloves. I hot glued the pinkie fingers and hid them under the ring finger, very simple solution. Then there were no yellow and orange stripped tights available for purchase anywhere! Just orange and black or orange and white and the stripes were too small. I ended up purchasing 3 pair of orange fuzzy socks and 3 pair of yellow socks, I had my daughter stuff and hand sew the socks together, we cut holes in the yellow pair for her legs and pulled them up to the knee, and she wore the orange fuzzy socks over her jazz shoes. The last thing we needed was to cover her head and make it yellow. I used my magical thrift store powers and found a yellow hoodie tee shirt which covered her hair, and a small yellow skirt to extended the length of the sweater! I attached the 2nd head last punched holes near the bottom of the roll strung old shoelaces through the holes and down through the sweater. Then I tied the laces across her chest and under her armpit, and used an old shoulder pad for leverage and padding between her shoulder and the paper towel roll. She got a ton of compliments, and twice the amount of candy because she carried 2 trick or treat bags! One for each head :)