Lobster in a Pot and Chefs
by Amy 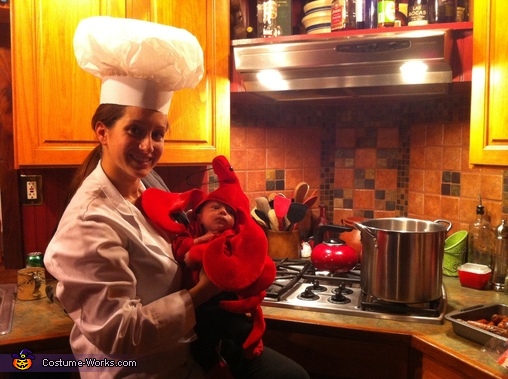 A word from Angela, the 'Mommy's Little Lobster' costume creator:

I'm not sure if this is considered a family costume or baby costume. Over the summer, I saw a lobster hat while I was on vacation in Maine. I was about 7 months pregnant and my son was due to be born about a month before halloween. So I bought the lobster hat for $10. And was talking to my friends that I could carry him around in a pot, which then gave me the idea to be a chef. I borrowed the chef coat from a friend and just wore some black pants and grabbed a kitchen towel and tongs from my own kitchen. I also made the chef hat out of card stock paper, tissue paper, and tape. Once my son was born, I measured his head and sowed up the hat so it would fit an infant. Also,My husband was going to be a hungry tourist and wear a corny visor, fanny pack and a lobster bib and have some utensils with him, but he got deployed and was overseas. I only spent $10 total and used house hold items I already had for all of my costume except the coat.