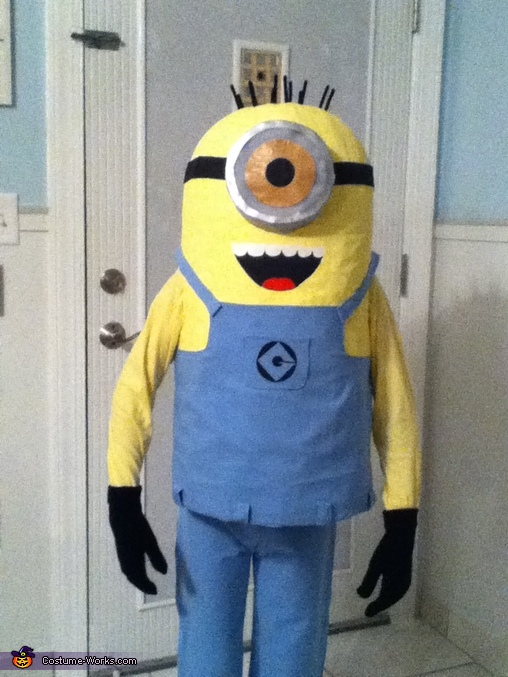 A word from Katiria, the 'Minion' costume creator:

My son is wearing this Minion costume I made out of paper mache. I started by inflating a beach ball from the dollar store and then I made my own paper mache mix. I mixed 1 cup of all purpose flour with 1 cup tap water. I mixed it until all the flour was dissolved and then I added 1 cup of hot(almost boiling) tap water. I mixed again until well blended. Next I cut strips of newspaper into 2 inch wide strands. I placed the inflated beach ball with the air flap down over a small garbage can so that it would not fall over while I worked on it. Once the paper mache mix cooled a bit, I dipped the newspaper strips into it one at a time, careful not to over soak it because it rips very easily and I placed each strand over the beach ball and smoothed out any bubbles. I did one layer over the top of the ball and let the strands hang as I reached the half way point of the ball. That gave a domed look to the top then a straight side down. After about 4 hours in the garage to dry, I was able to add a second layer of newspaper strips this time in a horizontal direction. I built up the layers around the top and side of the beach ball and small garbage can. Each newspaper strip was smoothed into place and allowed time for each layer to dry. When I felt it was sturdy on it's own I let the last layer dry for a whole day.

For the next step, I took out the beach ball by deflating it and then I took a string and poked it through the top of the paper mache dome I had created. I tied a strong knot so that I could hang the whole piece from higher up and not let anything touch it. I measured my son to determine how long the Minion body had to be and I knew where to stop the newspaper layers. I put more layers on the costume and worked my way down to the right length and I re-inflated the beach ball and placed it inside the costume so that it would keep it's shape and width all the way down as the layers dried.

Once I reached the length and thickness I wanted for the bottom portion of the Minion, I let it all dry out fully for a day and then I measured where my son's shoulders would be so I could cut out the arm holes on the side of the minion and I measured where his face would be so I could cut out where the eye will be. After cutting the eye circle out, I used a cereal box which was sturdier to make the rim around the goggle and the strap that goes around the head. I cut the cereal box to the width I wanted and soaked it in the paper mache mixture just a little bit longer than I would the newspaper strips. I positioned it in placed and once the layer was dry I used newspaper again to strengthen the area around the eye and arm holes.

With 2 yards of blue fabric I was able to make my son a pair of pants and I cut out the shape of an overall to cover the lower portion of the Minion and glued it in place. With leftover fabric, I cut out the shape of a tiny pocket and belt loops that I glued at the bottom. I made the Gru logo by drawing the logo and cutting it out of paper and using that as a stencil which I painted with black paint on the pocket.

I painted the Minion yellow and used silver and black for the goggle. I glued several layers of white tulle to the inside portion of the eye goggle so that it would look white but still allow my son to see through it. I then used a compass to measure out a circle of brown paper that would fit into the eye and I cut it out then glued it to the tulle. For the hair, I poked chenille stems through the top of the head and secured them with glue.

The costume was completed by a yellow long-sleeved shirt and black gloves.