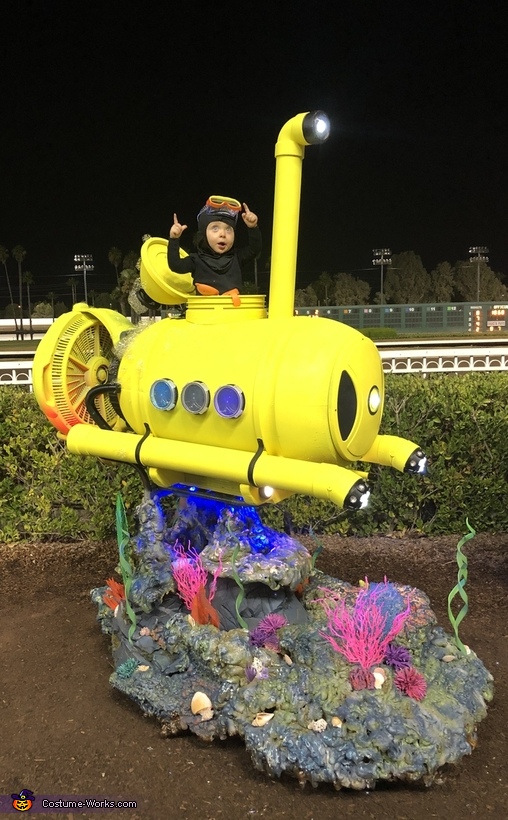 This homemade costume for babies entered our 2019 Halloween Costume Contest, in the Cutest Baby Costume nomination!

A word from Enzo, the 'Mini Submarine' costume creator:

This is my 15 month old son in his mini submarine costume. I've always been facinated with the idea of deep sea exploration. Maybe I can inspire a younger generation. I started this project with the idea of using a sturdy shell for the main body of the sub – which I landed on a 50 gallon drum. This was a perfect vessel to carve out openings like the hatch, windows, etc. The outriggers were made from a folding chair dolly, 2x4s, PVC pipe, roadside LED lights, house vents, and 4 pipe clamps. Details for the rear prop are fabricated from old fan parts and plastic tubing. The periscope on top was fitted with a small LED bulb inside which shines out of the lens. This can be turned manually to swivel 360 degrees. Maybe when my son gets a little older he’ll like rotating that thing. Believe it or not the main time spent building this costume was the seat he’s sitting in. A handmade seat made from pine is propped inside the 5 gallon pail I used as the hatch turret. The shoulder straps were from an old bike child carrier. To make the top lid look like it was popped open, there’s an aluminum bar glued to the backside which was bent at that angle. So the bar and hardware are disguised. The top half is made from a plastic salad bowl glued on top of the bucket lid. It really makes a statement like – Hi guys I just surfaced to say hello! To enable the craft to move easily on wheels to give the illusion it’s combing the ocean floor we had to build a replica of a coral reef. The rolling frame is actually a 6 wheeled dolly we covered in chicken wire and sprayed with insulation foam. After the foam cured, we were able to paint and decorate with shells and various plants. This added a unique effect which looks very realistic. I piped in a small battery powered bubble machine which was hidden in the back of the coral reef. What I am most proud of in the execution of this costume is that it looks like real ocean equipment, but also cute & childlike at the same time. Thanks for checking it out!