Marty Mcfly with Delorean
by Ashlynn

Back to the Future Marty McFly Costume 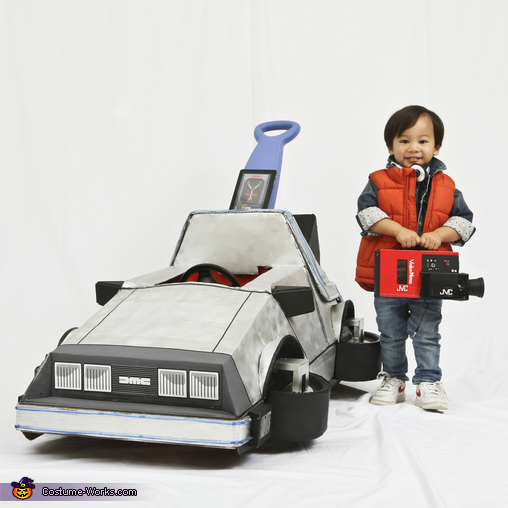 A word from Alex, the 'Mini McFly' costume creator:

As a fan of the Back to The Future films, I've always wanted a Delorean Time Machine and since Oct. 21 2015 marked a very significant date in BTTF2, we took this opportunity to build my son a Delorean Time Machine and put together a complete Marty costume to pay tribute to the greatest time travel movie of all time. We were inspired by Cory Newton-Smith's version of the pushcar Delorean. We constructed a Delorean shell out of cardboard and shaped it to give it a "cartoony" feel with details such as the back vents, mr fusion, and wheels in hover mode made from foam core, poster board and paper plates. But the most eye catching details are the electronics we incorporated such as the EL Wire trim on the front bumper and rear that was threaded through clear straws. We also used a tablet and iphone enabled with Back to the Future apps that featured a fully functional and interactive "time control panel" (on the dash) and the flux capacitor (on the push car handle). Both were also connected to blue tooth speakers used for sound effects provided by the app as well as "parts doo dads" mounted in the rear with the mr. fushion. The costume my son wore included a plaid shirt, denim jacket, orange puff vest, nike shoes, with swooshes we colored red to make them screen accurate, headphones and a JVC camcorder completely made from cardboard. The overall cost was very low. Most of the expenses went to the el wire and crafting materials such as duct tape, paint and poster board. Everything else we got free such as cardboard, straws and already had at home, i.e. clothes, tablet, iphone, speakers and pushcar. I would estimate that the project cost us around $40-50. This project was an amazing experience and I hope we made Halloween as much fun for other trick or treaters as the costume and Delorean did for my son.