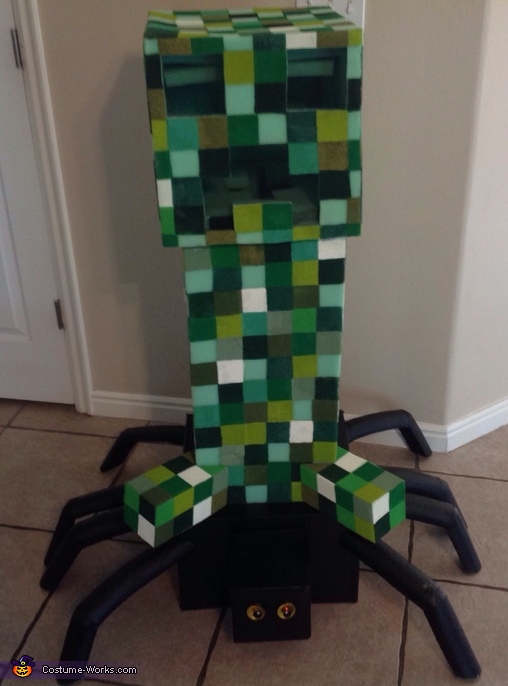 A word from Nichelle, the 'Minecraft: Creeper riding a Spider' costume creator:

My 6 year old son is in love with Minecraft. Last year, he really wanted to wear a Minecraft costume. We searched at regular stores, specialty Halloween stores, I even spent several hours searching online. The best I came up with was a box for a head an a foam sword, which just wasn't good enough for us. I went home and came up with plans for a fun Creeper riding a Spider costume. I started with green sheet foam from an upholstery store. I cut it into 4 rectangles for the body and 6 squares for the head. I cut a few dish sponges into squares and used them to paint squares on the body and head in several shades of green. Then I cut out the eye & mouth holes and hot glued window screen on them. Then all I had to do was hot glue the body sides together, the head sides and top together, and then the head to the body, with 2 foam strips between to rest on the shoulders. I made the spider out of 2 boxes, head and body. I made the legs out of foam pool toys. I also used glowing blinking lights for the eyes. I hot glued and zip tied the creeper to the Spider. The creeper ended about my sons knees so that he had a wider area to walk in the spider. The foam is very sturdy so he could even sit down on the spider box to rest. I also cut slits in the side of the body so my son could get his arms out for his candy bucket or to eat. When he pulled his arms inside you couldn't even see where the slits were. My son went crazy when he saw it! First he wore it to a Halloween fair. We walked in and took the costume in covered in plastic bags so he could make it a surprise. The costume is super easy to wear, it just slips right over his head, even easier than most costumes! When he put it on, he made an enormous scene! Kids were running up to him from all over the fair. They followed us around when we walked. He entered into the little fair costume contest and won the Grand over all First Prize! He was so proud, it was his 1st trophy ever. Then he wore it to the school halloween parade. Again, kids went crazy, but I was most shocked at how many parents knew who the creeper was from Minecraft. I was actually asked several times to sell the costume for this year. Later that night we went to the church's parking lot trick or treat party. Again, same reactions, but one was my favorite. I was approached by a good size group of teen girls who asked if they could hug him, and if they could walk him around the cars to get candy. In the parking lot, the parents hang out candy out of the back of out cars or while sitting in chairs in front of the cars. It's pretty cool and much safer than going door to door. Anyway, one of the pictures is of the teen girl mob hugging him, in fact you can't even really see him! The coolest thing is that we are now trying to figure out what he wants to be for this year. I realized the costume is super versatile. Because all the Minecraft character are basically the same shape, we can do a few simple changes to make a whole new character. We can paint it all black to make the "Enderman", or paint it black with white bones for the Skeletons. And the spider can be made into a pig with a saddle by taking off the legs and a paint job. This was the coolest costume I have ever made! I am crafty but not a crafty genius. It was super easy, it just took several weeks because it has to be painted in several steps. But there wasn't anything difficult at all. I hope you like it, and I can't wait until we figure out what it will become next!