Steve from Minecraft
by Amy 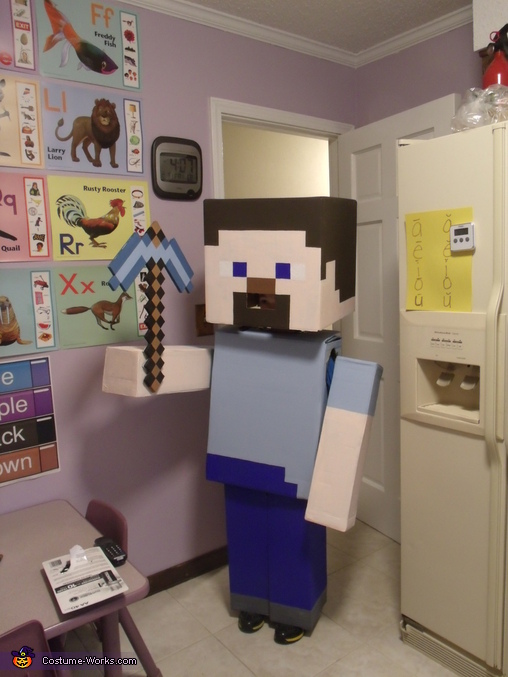 A word from Cullen, the 'Minecraft Steve' costume creator:

My seven year old son Colton is wearing the costume. He was the one that requested being Steve from Minecraft. Before beginning this project I had no idea who Steve was, all I knew was that him and other children his age loved playing the game. Now I know everything about Steve and the game.
As soon as Cole told me he wanted to be Steve I had him show me some pictures and immediately got to work. Luckily enough I had some packing boxes laying right at my feet. Ninety percent of the costume is cardboard all of it is custom shaped and recycled except for the head, which was purchased from a local Fed Ex store.
The whole costume including the Pickaxe was made from scratch and was extremely budgeted(no more then $30.00). Most of the costume is made to scale including the painted features like the eyes, ears, etc. The head is a 16" x 16" box and was purchased for I believe 4.99. It was the most difficult part of the costume. I had to use my sons bicycle helmet and create a custom formed cardboard strip with Velcro affixed to it so that it stuck to the helmet. This and the chin strap kept the box in place and on his head but also allowed him to move his head all around.
The torso is 16" x 8" and is open at the bottom and folds together at the top and has Velcro to hold it in place along with some dollar store sponges on the lower flap on the inside for shoulder pads, for comfort. The sponges made a big difference-this way the hard cardboard isn't resting directly on shoulder bones.
The legs are cut just under an eight inch width because they tuck up into the torso's opening at the bottom and they just rest on top of his shoes-VERY SIMPLE BUT VERY EFFECTIVE. The length is determined by the child just had to make sure the legs go far enough into the torso that they don't slip out.
Tricky part about the arms is- that before you close them up completely, you need to put a handle or something for the person to grab ahold of that's attached to the inside. This way the arm just doesn't slide off. I had little handles just made from a strip of cardboard glued to each side on the inside of the arms for my son to hold onto. I did this before I put the end piece on the bottom of the arm.
The pickaxe was made from layers of hardboard glued together. All the features both physical and painted were measured for accuracy. Pickaxe alone took a good six-hours to complete. I didn't really keep notes on anything but I'd approximate that with the acrylic painting(custom mixed colors except the cobalt blue legs and eyes) and all the measuring I probably had near 40hrs in on it. Could've bought the pickaxe and saved some time but it was so much fun I was determined to make everything, and on the lowest budget possible.
All the effort was well worth it. My son was a star everywhere we went. He must have taken around 200 pictures with people over the course of several days and the different events we went to. All the reactions he received were awesome!! But the best change was in him. Normally a very shy boy; I had to talk him into getting out of the car at the first event we went to, the "Battleship Blast" at the Battleship North Carolina in Wilmington. But before we reached the end of the line to get in he had taken 30-40 pictures with people. He started to wave to people and pose for pictures. Every where we went children were shouting STEVE and running up to him. He wore the costume for two hours at a time and often refused to take any part of it off. He was all smiles. I will definitely be making another costume next year!!