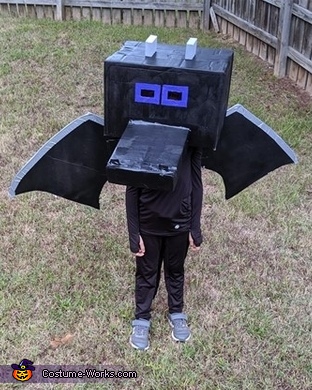 A word from Kelly, the 'Minecraft Ender Dragon' costume creator:

Who is Wearing the Costume: My son (6 yrs old)

Idea: My son came up with the idea to be an Ender Dragon from Minecraft

How to Make It:

Wings - Made out of cardboard, duct tape, spray paint, and foam blocks. They are secured to his shoulders by bungee cords around the wings and his shoulders.

Body - His body is a a pair of black cuddle duds he uses as long underwear for the winter.

Tail - Tail is a dress up dinosaur tail we had that was red/yellow - we covered it with black fabric and attached the foam blocks for scales that were spray painted.