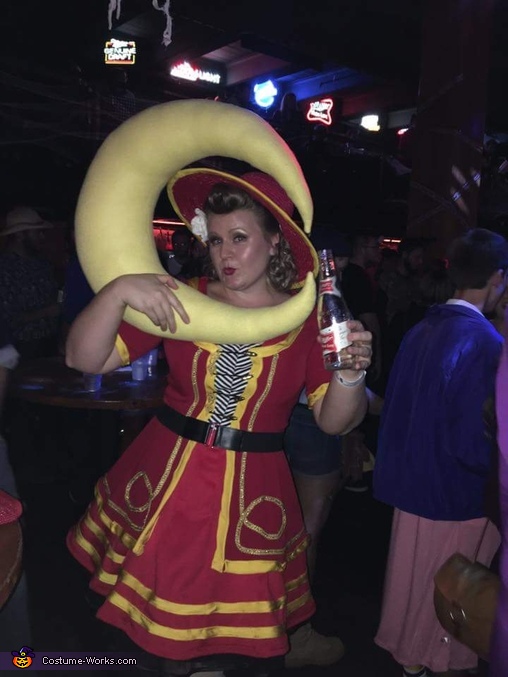 I currently live in Milwaukee, which is the home of the Miller Brewing Company. I was on a brewery tour with my family when my dad told me the story of my grandmother and her bowling team. He said that in the 50's, she was on a team called the Miller High Life Girls and her entire bowling team had made the miller high life girl costume and wore it each week when they played. I loved the vintage look of the costume and the idea of paying homage to my late grandmother, which inspired me to create this costume for myself this year.

This is a 3-piece costume, which consists of a dress, a coat, and a hat. I did not have a pattern for thos costume but used Google images of the High Life Girl to design the costume and select materials for its construction.

The first thing that I constructed was the dress, which was done by sewing together 2 different red dresses that I found on clearance. The skirt of the dress needed to be large, so I sewed together the
skirts of the dresses to give the most volume that I could while
blending the pieces to make it look like a cohesive dress. The black and white bodice of the final dress was actually the inside lining of one of the red dresses, which I removed and used to replace the front.

With regard to the coat, this was a 3rd red dress. I actually opened the back seam of the dress, which became the front of my coat. This dress had a slightes pleated front, which made it perfect as the back of this coat in that it allowed enough room for the dress. I hemmed the coat to fall about 1 inch above the last stripe on the dress and I used the extra fabric from the botton of this dress to
create sleeves for the coat.

Once the dress and coat were constructed, I spent the majority of the time adding the detail to both of these items. I purchased yellow fabric, which I sewed into 1-1/2 inch strips that I used to create the stripes on the skirt of the dress as well as to line all of the edges
of the coat. I also used this same yellow fabric to add the 1 inch
trim to the hat, which I sewed by hand. Next, I added the gold buttons to the coat and the elastic to close around them (for me, this was 4 inches of elastic but would vary depending on the opening you want for your coat. I then added gold ornaments over the elastic to make the coat look more polished. The last thing I added was the gold braided rope that went around the bottom of the coat and sleeves.

I wanted to make sure that my costume was recognizable, so I decided to create a plush moon as a prop to go along with my costume. To construct the moon, I purchased yellow fleece which I sewed into a half moon and stuffed with polyester filling. I intentionally
over-emphasized the roundness of the half moon out of concern that people might think I was holding a banana.