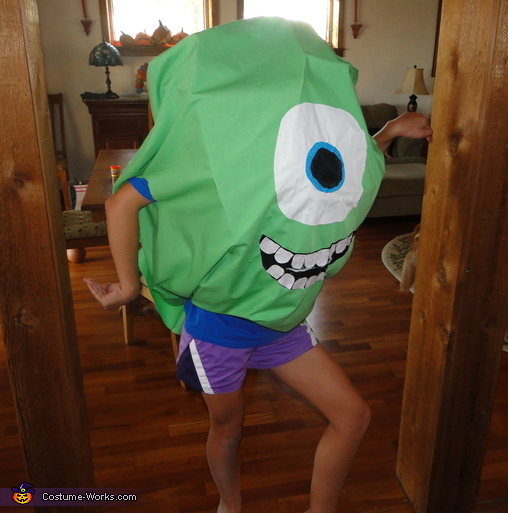 A word from Sophie, the 'Mike Wazowski' costume creator:

This Halloween I made myself a Mike Wazowski costume and got countless compliments! :) You Here's some how-to instructions:

Your Shopping List:
1) A role of wire that is thick enough to cut and bend, but not to flimsy. For instance, you probably wouldn't want to use craft/jewelry wire.
2) About 3 yards of bright green fabric. Broadcloth is what I used, although I suspect that many other types would do just fine.
3) 1/8 yard of white fabric (I also used broadcloth for this)
4) 1/8 yard of black fabric (again, broadcloth)
5) 1/4 yard fabric of your choice, though preferably lime green.
6) Seven mug-sized blocks of Styrofoam. I just cut these off of a Styrofoam box.
7) A needle and thread, or even better a sewing machine.
8) Stuffing. Any kind will work

Let's Get this Costume Started!

The Belt:
1) Cut two strips of your choice fabric that are long enough to fit around your waist plus a bit extra. Make them wide enough so once sewn together to form a tube, they can fit the Styrofoam in.
2) Sew the two strips of fabric together on both long sides on their wrong side. Turn inside out so you have a green sock like thing you could stick your hand through. Then sew one end closed.
3) Take a tiny bit of stuffing and stick it down in the closed end of your belt. Next, put a Styrofoam block in and push it up next to the stuffing.
4) Take another fluff of stuffing and layer it on top of the Styrofoam.
5) Continue steps 4 and 5 until your belt should be almost full with stuffing a Styrofoam and you have put 6 of your 7 pieces of foam into the belt.
6) Sew the other end of the belt closed. If your belt can't quite fit around you, what I did was take two stretchy cotton loops and sew them on one short end of your belt. Then sew two buttons on the other. Now you can kind of hook around yourself!
The Cage:
7) Cut six pieces of wire, approximately * each. Bend each wire
8) Cut tiny slit in your belt where the Styrofoam is. Stick one end of each of six of the wires into the Styrofoam. They should now all be slightly wobbly perhaps, but facing upwards creating what looks like a round wire cage. Now take your last piece of foam and put it at the top of your cage and secure it there by sticking the other end of all the wires into the sides.
9) I hot glued all the 12 openings around the wires just to keep them from slipping out.
Making it Mike:
10)Take your green fabric and drape it over the wire cage gluing it at the top piece of styrofoam only
11)glue or sew on eye and mouth, use see-through black fabric for pupil.
12) put it on! tuck extra green fabric into belt
13) take green pre-wrap and wrap legs and arms, or just wear green clothes
14) if you want, cover shoes with green cloth and glue on white nails
13) trick-or-treat and enjoy the amazement as people see your costume!