Mike from Monsters Inc.
by Prudence 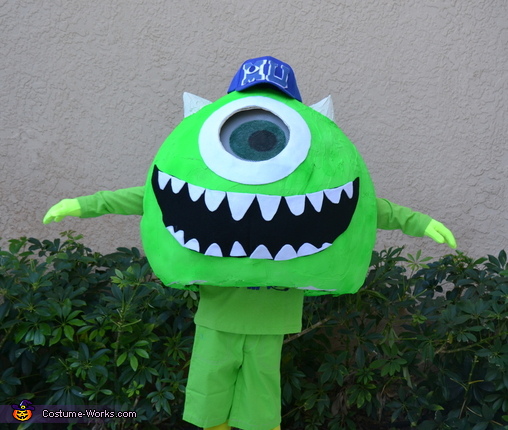 A word from Julie, the 'Mike' costume creator:

My 5 year old son is wearing the costume "Mike " from Monsters Inc. My three kids, ages 11, 5, and 4, came up with the idea to be the Monsters characters and the others were Sully and Boo. First we started with a large balloon and made a paper mache mixture. It took hours to cover the entire thing and we would add a more every few days. Finally we were able to pop the balloon through the small opening at the top where the knot of the balloon was. Because it was so big it did not feel very sturdy so I added a thin layer of dry wall and that did the trick! Next we cut out a large whole in the bottom, arm holes, and an "eye" hole-where my sons face would be! We spray painted the entire costume green and used felt for the eye ring, mouth, and teeth. For the "eye" we used a stitching screen and colored it with permanent marker green and taped it inside so my son could see out of the costume. Finally, I bought a plain blue hat and cut the letters "MU" out of felt and glued them to the hat, the hat covers the hole at the top of the costume. We had so much fun with this family project!. total cost of the project around 20$