Deadmau5 and Ke$ha
by Patrick 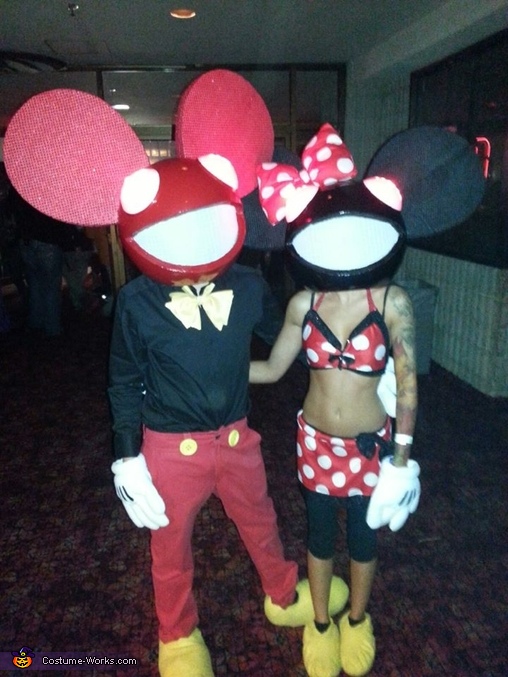 From The Zomboy Concert, Taking 2nd in the Contest!

A word from Nick, the 'Mickey and Minnie Deadmau5' costume creator:

So this year after thinking long and hard I finally came to a decision on this years Awesome Costume! Plenty of people Love Deadmau5 and his Music and who doesn't love Mickey and Minnie Mouse? so after finding only a couple pictures of one couple who had the same idea I did a few years ago, I decided to make Mickey and Minnie Deadmau5 Costumes!!!

So there are Plenty of How-Tos online about how to make a Deadmau5 head so I wont really get into the details on hot to make one but more what i do differently and a few key features to my costume!!
*To make the head and eyes I used a 14" acrylic lamp post globe and a 6" globe.
*As for the ears I used two layers of 3/4" insulation foam that had paper backing. (I used the pink stuff last time i made one and the glue was melting the foam) Then used threaded rod in between them for mounting them to the head. Then wrapped them in red and black sequence fabric. (two layers so it wasn't see through)
*Now the main thing I do different from most mau5heads is I paint my heads with Professional Automotive paint! (Working for a Body Shop has its perks!)
*I mounted two L.E.D. strips in each eye for the Xs
*Mounted a Fan inside for airflow
*Used a skate helmet attached with industrial grade velcro
*Ran the batteries and switch in the Back
**I also made from scratch My Yellow BowTie (which yes you actually have to tie like a real bowtie), Minnie's Top and Skirt, Both of our Feet, The Bow on Minnie's Head and Sewed the Buttons on my Pants.
Sadly I was running low on time so i bought the hands! Basically the only part of the costume not home made besides my shirt and pants!
***Any questions about any part of my costume feel free to contact me...SmallzKustomz@gmail.com

I was Mickey and my Beautiful friend Lyn was my Minnie for a couple nights out for parties and contests!

The first Night we went out I can only describe as absolutely INSANE!!! When we first got to the venue for the party it was slow but as soon as we finished putting on the costumes (head and hands) and people realized what we were it was nonstop insanity all night! We Had literally hundreds of people asking us to take pictures of us and with us the whole night! I felt like a celebrity! haha. I think we only enjoyed about 15 mins of the concert because the other 4 hours we were there was consumed by barely being able to move because soo many people wanted pictures! At the end of the night we ended up taking 2nd place in the costume contest even though everyone said we should have gotten first, but i guess when you're a female wearing barely any clothes you have the upper hand. But eveyone after said we should have won and everyone we talked to throughout the night said we had the Best costume there!!
I also went out another night with a different friend taking Second at that contest as well, Losing to a costume that i've seen plenty of times and it wasn't even that good but everyone there loves Futurama so i guess Binder had the win.

Well Thank you All for taking the time to view and read about my Costume and I Hope you All Enjoy it!!!