Alfred Hitchcock's "The Birds"
by Debbie

Tippi Hedren in The Birds
by Suzanne

Tippi Hedren and a Crow
by Jean

Melanie from The Birds Costume 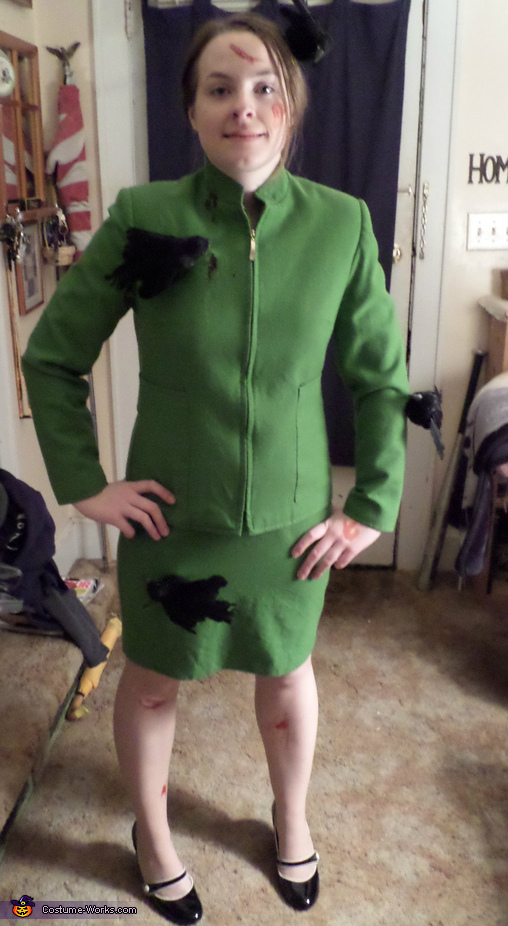 Melanie from The Birds

A word from Kaylee, the 'Melanie from The Birds' costume creator:

I am the one wearing the costume. I got the idea after seeing fake crows at the store after recently watching the movie The Birds.I used a suit I got at the Salvation Army, some fake crows, a hot glue gun, panty hose, fake blood, scissors, bobby pins, cotton swabs, and high heels. I took my suit and used scissors to cut it up a little and put holes in it and then I glued some fake crows on to the suit with the hot glue gun. I used scissors to cut a few holes in my panty hose. I hot glued gunned some bobby pins on to one of the fake crows. I put my panty hose on, my suit on, did my hair kind of messy and then put the bird with bobby pins on it in my hair. The I used the cotton swabs to put fake blood on my face, hands, legs, and suit. This costume cost me under $15 and it's my favorite costume I have ever worn.