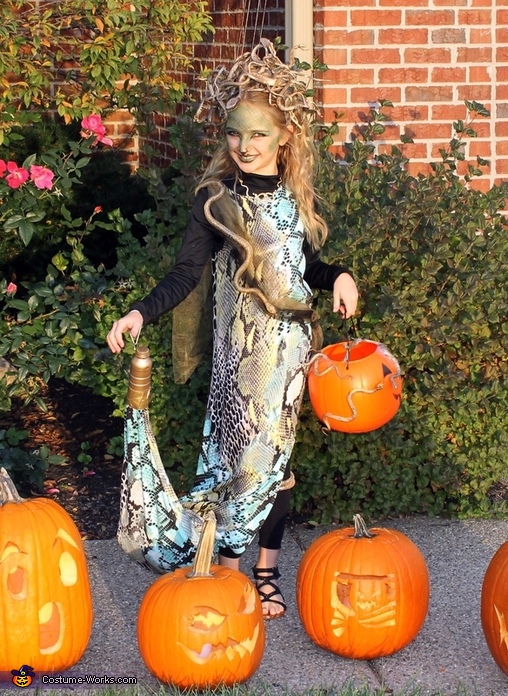 A word from Sherry, the 'Medusa' costume creator:

As a child, I remember watching the 1981 film Clash of the Titans and being absolutely horrified by Medusa and her ability to render any onlooker into stone. Although Medusa is a rather terrifying myth, she is also a great Halloween costume. I shared my childhood desire to dress as Medusa with my ten-year-old daughter and the next thing I knew I was making a Medusa costume for her. The mass produced Medusa costumes were rather boring so I turned to the Internet for ideas. I took bits and pieces from costumes I liked and compiled them into something I think represents the essence of Medusa.
The Medusa dress is based on the Simplicity pattern #4043 (Mermaid Costumes). I purchased the snake print fabric from EBay and used the Simplicity pattern as my general outline for the dress. I made adjustments to the bodice and made the tail shaped like a snake instead of a mermaid. The tail is stuffed with fiberfill to give it some shape and the end of the tail is hot glued to a small water bottle (spray painted gold) filled with beads to serve as a rattle. The bottle is attached to the wrist with a hair band. I felt this style of dress and tail provided the best ease of movement for trick-or-treating. To give it more of a Greek goddess appearance, I sewed black and gold netting diagonally across the bodice. I attached a large rubber snake painted gold with black glitter and red eyes. I added a store bought gold snake necklace and bracelet.
The headpiece is the most important part of the costume. I have to admit, I got the idea for the headpiece from a great video on YouTube. I made a few adjustments to the headpiece making it larger, but the overall concept was based on a YouTube video. Two clear headbands with holes are glued and wired together to support the weight of the snakes. The headpiece consists of 12 (14") rubber rainforest snakes, 8 (8 1/2") stretchy toy snakes and one large dollar store rubber snake (approx. 12"). Using gold spray paint, I painted the snakes gold and added black glitter while they were wet. I painted the snakes eyes red and/or added red pins for eyes. The snakes were attached using 20 gauge steel wire (for larger snakes) and 24 gauge copper wire for smaller snakes. Using needle nose pliers, I wrapped the wire around the snakes and wrapped them around the chain link holes on the headband. Each snake was positioned in different directions and the large snake was used as the center piece. The overall cost of materials was approximately $50, but I already had some of the items on hand.
The idea for the make up also came from YouTube. I applied a light green base to my daughter's forehead, nose and cheeks. I placed a fishnet stocking over her head and applied dark green, black, yellow and blue make up directly over the stocking. When the stocking is carefully removed, it leaves a snake skin effect.
It may have taken me almost thirty years to get around to making the costume, but the costume itself only took a few days. The greatest amount of time was spent gathering the materials. The snakes took a couple of days to dry and only a few hours to assemble. My sewing skills are a little rusty, so the dress took several hours to complete. I would recommend using a different type of paint when painting the snakes. Perhaps something better suited for rubber. The gummy snakes tended to disintegrate and the large rubber snakes never did fully dry. I poured a layer of baby powder over the rubber snakes and lightly brushed away the powder to help get rid of the tacky feeling left from the wet paint. It helped, but the paint is still a little sticky.
A lot of people thought I was crazy for tackling this project. There are so many awesome mass produced costumes for sale that many could not understand why I would go to all the trouble to make a costume. Perhaps I did it to fulfill a childhood desire, but the more likely reason is because my daughter believed I could. Oh, the things we will do for our kids! Did I mention I have a five-year-old son? He wants to be a fire breathing dragon next year!