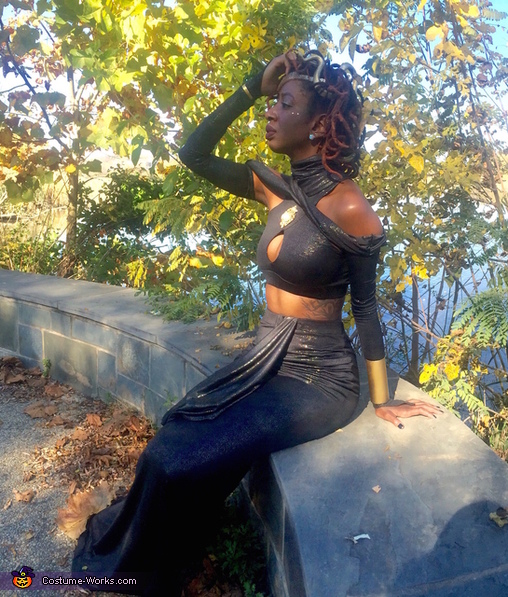 A word from Syreeta, the 'Medusa' costume creator:

I have to come right out and admit that I can’t take complete credit for this one. The design, styling, and sewing was all me, but the idea was from a little friend… literally.
I work at an elementary school and I’ve always enjoyed working with kids because there’s never a dull moment. I’m the adult that’s a little more informal- impromptu dancing, going down the slide, inside jokes, etc. Nicknames are also big. I’m known by many kids as “Bob.” (I’m female and my real name is Syreeta.) When they write my name on drawings or cards, it says Bob. When they have a question, they call me Bob. When they ask of my whereabouts, they inquire about Bob. My boss and coworkers know this, some parents know this… I also answer to this. It started almost 3 years ago and there’s no use in shaking it now. “Bob the Builder” is my theme song and often sung by a small, casual children’s choir. Side note: I am the only adult there with a nickname.

But I wasn’t Bob the Builder for Halloween. (Almost, though!)

For elementary students, they’re a very intelligent bunch. One day, I wear my hair down and curly (I have locs so it looks especially coiled) and one kid took notice. He glances up and goes, “Bob, you look like Medusa.” The rest is history.

This was perfect! I’m a fashion designer and seamstress… I love Halloween… I specialize in custom garment design. This had to happen. Not to mention, I’m not the girliest of girls; I love a little grunge and edge. Medusa was just perfectly perfect.

As for design, I like being relatively comfortable (and warm in October) balanced with femininity. Medusa is often depicted as just a head, so I had a bit of freedom with the garments. I went through what I had on hand (budget!) and chose a spandex that was black with a gold sparkle. A maxi skirt with a little drape for Greek reference, a turtleneck because I love them, and arm sleeves for good measure. The sleeves are attached to two drapes that cross over top of the crop top and are removable. Since I’m an independent designer, it was important that I could break this look down and still use it as wearable garments- a costume that could have more longevity. I grabbed the brooch from a local thrift store, along with the cuff. The cuff was originally silver so it was blasted gold along with some rubber snakes. Ironically, the snakes were the most difficult part. I left them for last, thinking they’d be an easy find, but wound up driving around for 4ish hours to 8 or so stores before I found them. I passed a pet store in the midst of this and joked that I could have found real snakes before the fake ones. My head piece was a cheap beauty supply store necklace (win!). As I worked, I dropped hints on snapchat and twitter since this was such a fun project!

My hair was curled and pinned up and around my gold snakes, a little makeup was added, and Medusa was alive! I actually thought I would run into some challenges getting them to stay in but bobby pins did the trick, even if it meant using a trillion of them. Ironically, all portions of this project that I assumed would be easy were a bit harder and vice versa. Typical sewing... but always with a rewarding outcome!

I wore Medusa from the neck up to the school’s Halloween parade and it was a hit. (I credited my student each time, of course.) Parents down to some 1st graders would run off shouting that they weren’t allowed to look into my eyes. This continued to Saturday night when I wore the entire costume out. This was mixed with compliments on my hair to inquiries on if I made the clothing. Overall, Medusa was a monstrous success! … And people wonder why I love working with kids. The fun never ends!