Medusa the Gorgon
by Lauren 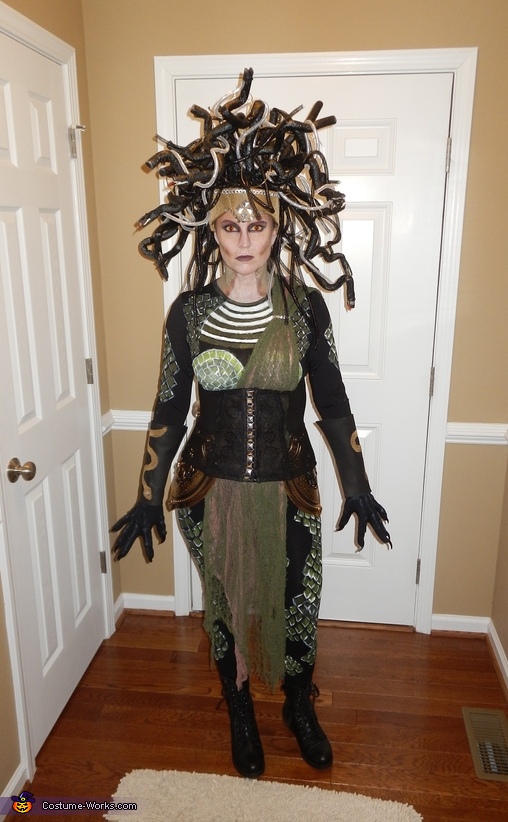 A word from Lori, the 'Medusa' costume creator:

I, myself, am wearing the costume. I did an extensive search on Google for adult costumes, couples costumes, character costumes, super hero's etc. and came across Medusa costumes. I was intrigued with some of the photos I saw and the many different versions you could do. I came across one photo I really liked and decided to mimic her costume.

The hat was made out of felt, wire, backer rod tubular foam, tubular crinoline, and gold string. I created the base out of molded copper wire and the felt was hot glued to the wire as a base to attach the snakes. The snakes were made out of the foam and crinoline. I cut the foam, 3/4", to several different lengths and used an Exacto knife to carve out the mouth. The tongues were made out of red construction paper and the eyes were out of black beading from Michael's. The snakes were then fed down thin, 20lb wiring and curved and hot glued to the hat base. I then spray painted all of that black and then added silver crinoline to represent smaller snakes and attached that as well.

The crown was then created out of foam backing and a gold table runner. I couldn't find fabric I really liked that was thick enough to create a stiffer crown so I found the table runner and decided to cut out a section of that. :-) I then hot glued silver studs to the crown and down the black corset.

My body suit was made out of black thin thermal underwear. I hand painted the snake scales down my legs and body. Used Grass Green, Metallic Green and white as a highlighter.

I took 2 cheesecloth fabrics and dyed one green and one brown to drape over my shoulder to add some coverage.

I also took a pair of black fabric gloves and super glued long nails to the outside and painted them black and sketched a skeleton look to the outside of my hands. Added combat boots and toy shields to my hips (which I found at Dollar Tree) and that was my outfit.

My makeup was created out of Halloween face paint, brown facial highlights and reptile contacts.

I spent approximately $200 total on this costume but that's with everything included and maximizing my budget.