The Samurai
by Michelle 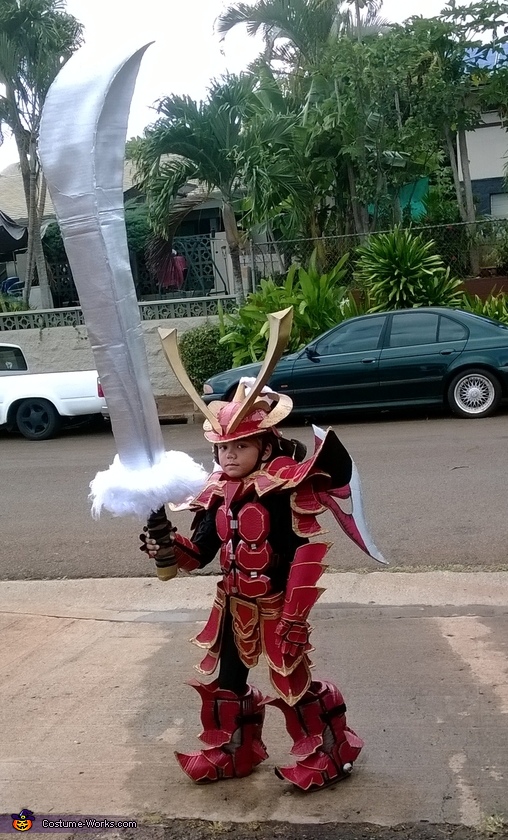 Is my sword big enough, or what.

This homemade costume for boys entered our 2014 Halloween Costume Contest, in the Best Children's Costume nomination!

A word from Valentine, the 'Mech Samurai Warrior' costume creator:

My son Isaiah 7yrs as of 10/11/2014 is wearing the Mech Samurai costume. One day my wife mentioned that bought costumes are so repetitive and ask me to home make a costume that has not been done like a samurai not a ninja. Eco-suit, full cardboard costume N sword.

Thus, begins my journey into the realm of cardboardia. I decided something difficult but minimal costume coverage like a helmet, shoulder, belt and simple boots. I tested cardboard for flexibility; none and accidentally drew a large pattern for the helmet horns and shoulder armor, followed through with taping and gluing, and as always, when you mess with the glue gun, you get the burns. Ooowww. I finished with bronze paint and gold trim then my OCD fired the neurons and decided that excessive armor was in order. I made more card stock patterns-traced for both sides which took twice as long. To make things worse, the internet didn't help much at all for design and painting.

How To's and then some

1. weird curves: I used the basic system of drawing the curves I wanted and setting it at an angle on the card stock sheet and drawing the shadow's line for the helmet attachment and the top front of the boot.

2. waist/body: For most of the armor scales, I drew one pattern size for each set, e.g. four scales per hip at 4", and two scales per front thigh at 8".

3. Body: I measured my son's body and used that Wdth/Ht as max area for 6 pieces front, the back needed special effects with 4 layers (Think in terms of spinal cord connections). I drew and cut each section, taped and glued them together, trimmed the edges with hot glue, then moved to the next set.

4. Forearm/wrist: I measured the forearm and drew/cut 2 bands (wrist and upper forearm) per arm, cut out and attached wraps full forearm length around the bands and glued them together. I drew fancy scales and attached them to the forearm guard.

5. Boot: I did the same pattern for the shin/calf. note: I measured the calf height down to the ankle which is the swivel joint so he could bend his knee.
a. I built the boot as one solid basic shell then I cut it down the middle on each side to slip his foot into the boot.
b. I made teeth at the cut edges so the boot can close properly. I drew fancy attachments and went crazy packing stuff on.
c. Shoe: I measured his shoe so I could make the fake shoe to cover his real one. I purposely left extra cardboard sticking out the back near his ankle joint so I could attach this to the swivel joint on the boot.
d. I made holes in the joints to connect everything with a cardboard rivet. One boot broke so, I reused shoe laces and attached the same way inside and out, not wrapping it; this idea will not work. Once again I lined the boot edges with hot glue.

7. Extras: I added yarn to the helmet, shredded yarn for the sword guard. Nylon straps are at the boot side, body armor ribs and chin straps. For the sword same as 6, what ever weapon you choose, draw it and cut it out.

After all that, I painted everything red, black underneath, hand painted gold trim and silver metal parts.
Note: hot glue will not stick to paint, paint should be last.