She-Ra and Swiftwind
by Katie

She-Ra Princess of Power
by Elisha

He-Man and She-Ra
by Emily

Masters of the Universe Family Costume 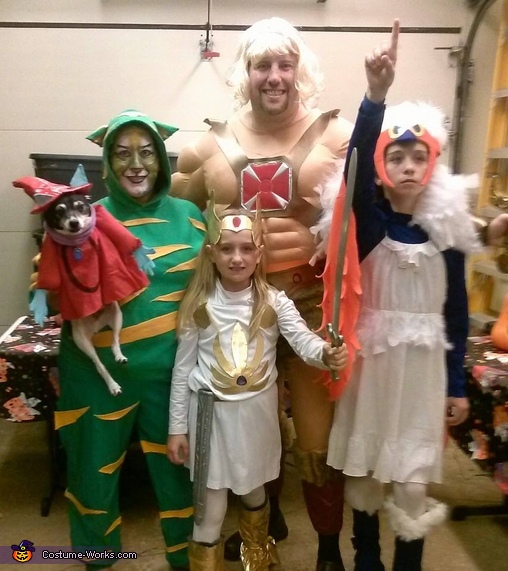 Master's of the Universe Family

A word from Christine, the 'Masters of the Universe' costume creator:

Inspiration: My husband and I grew up in the 80’s, and as kids our favorite cartoon characters were He-man and She-ra. Every year I like to do a group family costume, so when discussing what we wanted to be this year, Master’s of the Universe won! Deciding who everyone was going to be took a few days, we knew my husband was going to be He-man, but my girls wanted to see all of their options before they picked who they wanted to be. After a few days of internet research and watching DVD’s of the original cartoon series, the characters were chosen. It was decided that I would be Cringer/Battle Cat, He-mans loyal companion. My oldest daughter chose to be the ever strong Sorceress of Castle Greyskull . And my youngest daughter chose to be She-ra, because she thought she was the prettiest. And because he is the littlest, our dog got voted to become Orko.

Costume Construction: The making of the costumes began with sitting down and making a list of all pieces that I would need to construct each costume. For the Sorceress the list was: orange fabric, blue fabric, blue leotard or under armour, white dress, blue boots or boots to spray paint, white leggings, white hat, white feathers. For She-ra the list was: red cape or fabric, white dress, gold fabric, boots to cover with fabric. Battle Cat had a short list: Green hoodie, yellow fabric for stripes, and face paint. For the He-man costume we had purchased a cheap costume on-line, then I took it apart and changed almost everything to make it way better… so my list for He-man was: leather like fabric, fur fabric, zipper, Velcro. After a few days of visiting local thrift stores and fabric stores, I had all that I needed to get started.

He-man: The first thing I did with the He-man costume was using my seam ripper, I separated the bottom half of the costume from the top half, removing the small loin cloth piece that came with the costume. Then I sewed on a larger piece of fur fabric that went all the way around the costume, instead of just the front. I also added a zipper, in the appropriate place, for my husband to use the restroom, so he wouldn’t have to remove the entire costume to do so. I also added new matching fur on the pant legs for the boot tops. Then I cut off the cheap looking chest straps, and made new ones that went all the way around his back for a more authentic look. Using the same leather-like fabric, I also made a matching belt and wrist bands. He-mans sword was purchased at a second hand store, and the wig was left over from a previous years costume.

She-ra: For She-ra, I found a white dress at a thrift store and turned it inside out. To make to symbol in the center of the dress I looked up the design on-line and drew it freehand on to a piece of posterboard and then cut it out. Then I used fabric, from a pair of gold pants I found also at the thrift store, to cover the piece of poster board in gold. Then I simply glued the fabric around it using a glue stick, and then used a hot glue gun to attach the symbol to the dress. I had a blue gem from one of my kids dress-up necklaces which I hot glued to the center of the symbol. For the crown I used the same method as the chest symbol, cutting out the piece from poster board then wrapping it in more gold fabric from the pair of pants bought at the thrift store. The red gem on the crown was an old keychain used for marketing, that I cut to shape and flipped over so the words wouldn’t be visible, then hot glued into place. The wrist bands were made by cutting short two gold belts found at the thrift store, and adding to more holes so they would fit my daughter’s wrists. The gold belt and red cape were recycled from a wonder woman my kids wore a previous year. The boots were made by using the last pieces of the gold thrift store pants and sewing them together into boot covers, which were glued and sewn on to an old pair of boots.

Sorceress of Castle Greyskull: The wings were made using two pieces found at a local thrift store, a orange sweatshirt, and a blue football jersey. The blue jersey was cut across from armpit to armpit leaving only the neck and sleeves. Then a large piece of orange fabric was cut from the orange sweatshirt and sewn onto the underside of the blue sleeves. An razor blade was used to cut the feather shapes into the orange sweatshirt fabric. The bird hat was made from an old white hat again purchased at the thrift store. The bill of the hat was trimmed leaving only a small part for the beak, which was covered in leftover fabric from the football jersey. A piece of scrap white fabric was glued over the hat and used as a base to hot glue the white feathers on. White feathers were also hot glued to the front of a white dress found also at the thrift store along with a blue under armour shirt.

Battle Cat: Battle Cat was made from a green hoodie purchased at a thrift store. The pocket on the front of the hoodie was removed, and the fabric from that was used to make a tail. The hoodie had words on it, so it was turned inside out. The yellow stripes were cut from a fleece blanket purchased at the thrift store, and then attached to the hoodie with hot glue. The ears were made from extra fabric cut from the inside of the hood, they are simply triangle pieces cut from poster board folded over, with the fabric glued to them, then they were sewed to the hood. The face paint was purchased at a craft store and I applied it myself by looking in a mirror.

Orko: The dog’s Orko costume was made all by hand. The dress part was cut from a red sheet found at the thrift store. The arms were stuffed with leftover fiber fill. The hands and ears were cut from a piece of poster board and wrapped in blue fabric cut from an old pair of shorts that no longer fit my kids. Orko’s hat was made from cardboard and wrapped in red duct tape; the elastic chin strap was made using the elastic from the waist of an old pair of shorts.

These Master’s of the Universe costumes were so fun to make and we got tons of complements from everyone who loved the awesome 80’s series. Making the costumes was almost as fun as wearing them, and it was a hoot to see everyone’s reactions. We look forward to being able to wear these costumes again soon.