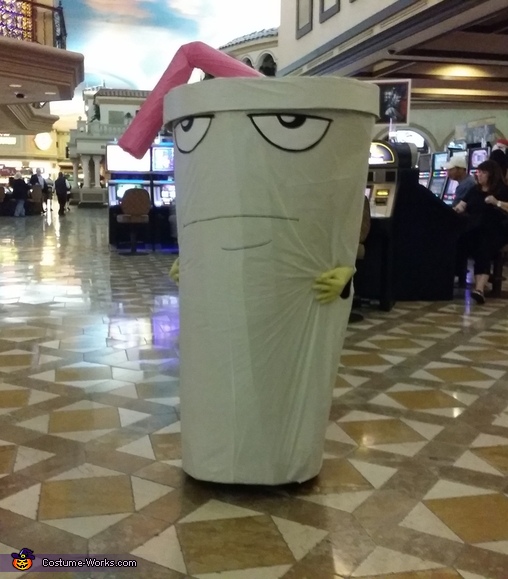 A word from Aleta, the 'Master Shake' costume creator:

I was watching some Aqua Teen Hunger Force reruns while researching local Halloween events and became inspired. I decided to make my make my own costume, modeled after my favorite Aqua Teen character: Master Shake! I had no clue where to start but I drove down to my local Walmart to get ideas. They were restocking their aisles at the time so I asked them for a bunch of boxes to cut up and use for the body of the costume. I spent $1.38 on some yellow dish washing gloves to go with the costume too. I already had some permanent markers, disposable pink and white table cloths, markers, wood, 3-M glue, hot glue, staples, zip ties, paper, Scotch tape, duct tape, and A BUNCH of other super cheap supplies I had left over from school and had collected from yard sales so I got started putting it all together and after about a day's worth of work and about $6 total in supplies (including those I already had) I ended up with this! Not gonna lie, it can get pretty hot inside this costume but it's SO worth it and so funny walking down the street and stopping in the nightclubs here in Vegas (my hometown) getting all the laughs and having everyone I pass stopping and asking to take pics with me. Maybe next year I'll go as Dr. Weird!