Mary Poppins and Bert
by Melanie

Mary Poppins and Bert
by Heather and Tanner

Mary Poppins and Bert
by Pam 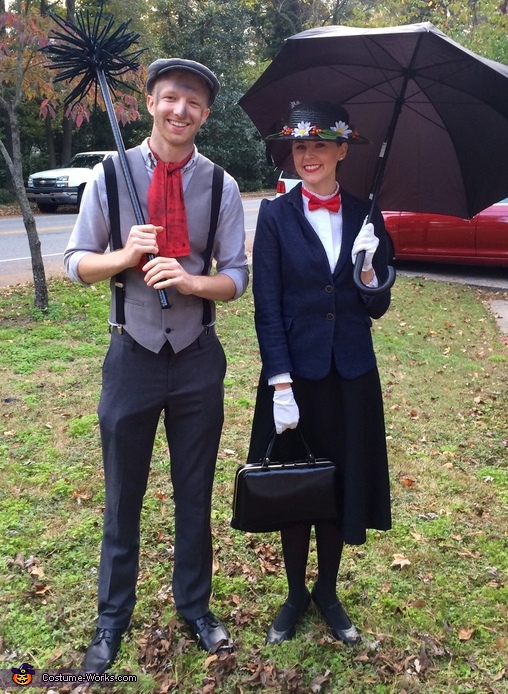 A word from Dana, the 'Mary Poppins & the Chimney Sweep' costume creator:

My boyfriend, Paul and I wanted to dress up together for a costume party, so I began to think of couple costume ideas. I love the Classics and Mary Poppins and Bert became an obvious choice. These characters seem to depicts parts of our own personalities, too, which added to the fun. We started with our own closets to see what clothing items we already had. He had slacks and a button down, I had tights, shoes, and the umbrella. Next, we went to thrift stores for the skirt ($4), shirt ($1), basic straw hat ($2), and blazer ($8). Then I contacted family members who had a hat for the chimney sweep and the red bow tie. Paul bought his vest on sale at Jc Penney for $40, because he knew he would wear it again. He also bought some suspenders from target that he plans to wear again, though, he could have worn some cheaper ones from the thrift store. This could have been purchased more cheaply if desired or borrowed. Paul made his chimney sweep by buying a 1" wooden dowel ($2.99) and 50 black pipe cleaners ($2.99) from hobby lobby. He got some electrical tape from Kmart (nearest store) and wrapped the dowel in tape until he got to a few inches from the top. He bent the pipe cleaners and wrapped the tape to secure each pipe cleaner as he went around. My hat probably took the most effort, because it's not easy to find a Mary Poppins hat. I took a basic straw hat from the thrift store and cut the brim to make it shorter. I also cut some of the height from the top of the hat and reattached it with thread. I then spray painted the hat black and superglued the daisies and red berries on the hat. I also wore a red ribbon sash, but the jacket covered it. I smudged some black eyeshadow on his face and made sure I had red lips and rosy cheeks. So, all in all, my outfit cost about $15 with a little time invested in searching for items and putting them together. His cost a little more because he in"vested" in a vest, but put less time to put together.