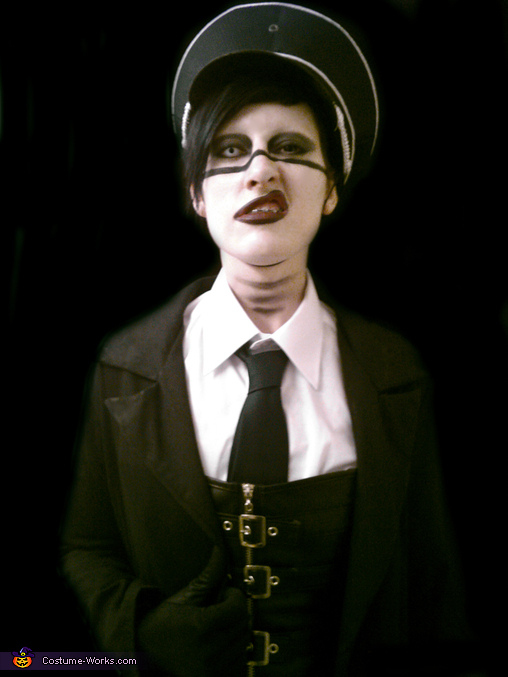 A word from Courtney, the 'Marilyn Manson' costume creator:

Marilyn Manson is a cultural icon who is well known for his gothic appearance. Over the years he has had many different looks.
I actually was teased in middle school and high school because of my goth appearance. Other students would call me Marilyn Manson, or sing 'the Beautiful People' when I would get on the bus. In High School they would sing the Dope Show at me.

It's funny now to me 10 years later as I normally honestly don't look anything like him :) I just thought I could pull of the costume and it would look awesome!

I went with the 2001 Holy Wood era inspired look.

I found just about everything on Ebay, a local vintage store here in Portland, or from my own closet.
The Hat originally had a metal star on it, which was removable. The top white trim was originally red, so I meticulously painted it white with two coats of white acrylic paint. The bottom white trim is a strand of white yarn that I used fabric glue to go completely around the hat.

For makeup I went with MM's look from the video for Fight Song. I used a white cream makeup, not grease makeup. This allowed me to get a white toned face instead of making myself super white.

It was a lot of fun and I did a LOT of research staring at photos on google images. You don't always have to be exact, just have fun with it :)