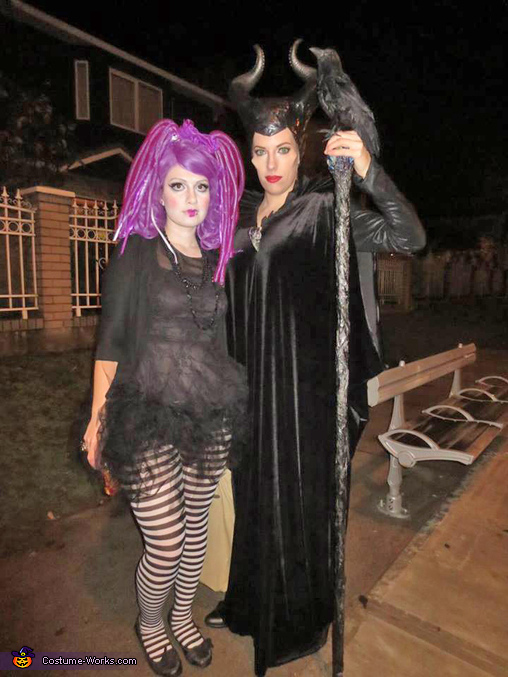 A word from Jody, the 'Maleficent' costume creator:

I LOVED the movie Maleficent and knew that I wanted to create a halloween costume based on the film. Rather than choosing the iconic "Christening Gown" I opted for a recreation of a costume from later in the film, when Maleficent has grown to love Aurora and regrets deeply her decision to put a curse on her.

I created everything myself except for the foam horns which are the official licensed version and the crow which I did add feathers to as he was missing a tail and needed some extra fluffing.

The headdress is made from a LOT of duct tape, a foam shoulder pad and black electrical tape.
The staff is a wooden dowel covered in plaster cloth, shaped and painted black. The "ball" at the top of the staff is foam covered in plaster and painted with various nail polishes.
The "dress" is in two parts, a stretch lycra underdress and a black velvet tunic of sorts. The collar is constructed of card which was pleated then fabric applied to both sides, then pleated again while wet, ironed and put under weights to set in place.
The bird skull brooch is made of air dry clay, painted with nail polish.
The trickiest part of the costume were the cheekbone prosthetics. They took a LOT of work and practice to get right. They are made of fx grade gelatin and were produced by making a cast of my face and making a sculpt which I then cast in plaster and filled with the gelatin mixture.
The nails were custom shaped and painted to match Maleficent's nails in the movie...louboutin style, (red underneath, nude on top)
The whole look was finished with makeup, fake eyelashes and bright green contact lenses.