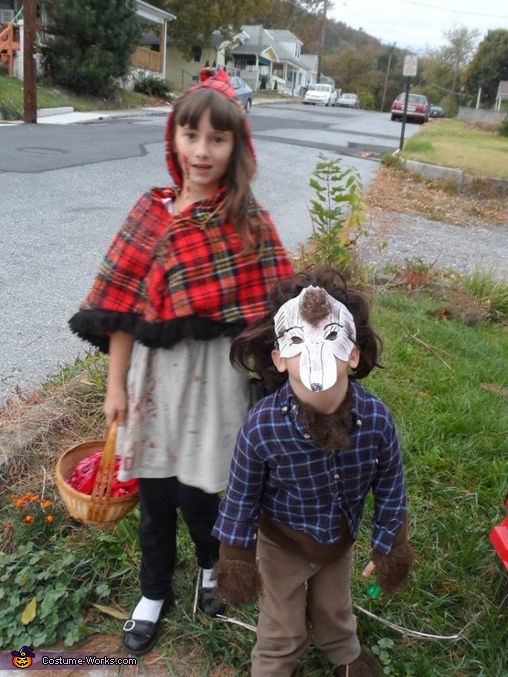 A word from Melissa, the 'Little Red Riding and Werewolf' costume creator:

My 10 yr old daughter's Little Red Riding Hood and my 4yr old son plays the wolf who took a bite out of her. We got the idea by trying to twist a fairy tale to be a little different.
There are a couple different versions of the Big Bad Wolf costume, but not all are pictured due to my 4 year old not wanting to wear certain things or give good pics.

I created this simple wolf costume by buying a pair of plain brown sweat pants and long sleeved flannel shirt at the thrift store. I then added some fake brown fur that I glued to the top of an old sweatshirt, neck area. I also add fur to the area where the cuff is for his hands. I cut a small hole in the cuff to place thumb through and would cover his hand area - making it look like hairy hands.
Lastly, I added a flannel shirt for that teen wolf look. This also was tried as adding a flannel nightgown, bloodied upped for effect, to portray Grandma from Little Red Riding Hood instead, but my boy did not want to wear it!
I had an old werewolf wig to use on his head and I made some ears out of cardboard to add one each side.
We made wolf feet by adding a brown fabric around his shoes and adding fake fur to top of them.
Now for his face you can either use makeup to make a wolf face (which he would not cooperate for) or make a mask for him to wear (which is what we had to do). The simple wolf mask is just a piece of poster board cut and colored like a wolf with a little added fur. I used a piece of yarn to tie it with and secure it in place.
We added fake sharp nails to his fingers and can easily add fake sharp teeth if you want.

Our version of the Little Red Riding Hood costume is just a bloodied up dress with a bloody red hooded cloak. We gave her a basket to carry and made up her face with a bite out of her cheek from the Bad Wolf attack.