Serial Killer & his Victim
by Molly 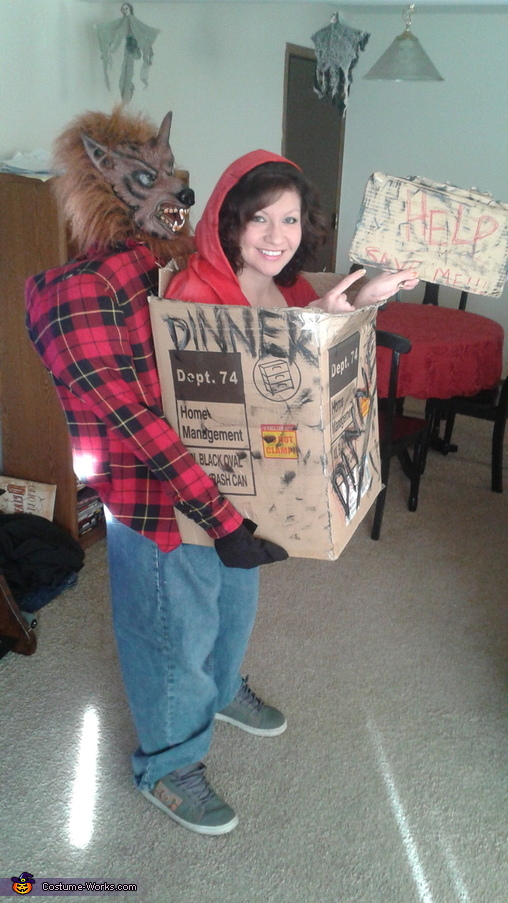 A word from Jessica, the 'Little Red and the Big Bad Wolf' costume creator:

I am the only person in the costume. I work at a casino where we are not allowed to wear paint, crazy make-up, masks or wigs or have and kind of weapons for our costume. I had to think a lot about what I would want to be and what would be appropriate. I knew I wanted to be carried by something and started with 2 boxes before anything else. I found one that was the size of a torsos for the wolf and one that was big enough to fit me and long enough to cover my upper body down to my hip with enough room to move a little inside. I found them at Wal-Mart. If you ask they have no problem with you shopping around for boxes for free. With the box I'm in I left the whole bottom and only cut out a big part of the back for me to fit my upper body. I trimmed as needed so I could comfortably stand and look through the top. I then took the other box (the wolf) and made a neck out of cardboard and taped it to his torso. I found thick sturdy cylinder made of cardboard that was used to roll up fabric and fit it in the neck and taped it all together. This was perfect to keep the head up. I then went on the search for what it should be. found the wolf mask and flannel shirt at good will. I was finally ready to put it together!! I first put the shirt on the torso box and decided to set it so the wolf would be a little taller then me. I taped it in place cutting 2 slits in the shirt and using duck tape over the wolf sholders, threw the slits and taping it to the other box. I then cut the wolfs torso box to fit with the other box at a degree angle. I did have to trim a little to fit it just right. I cut the flannel shirt as needed and taped to all together with duck tape inside. I taped the shirt to the inside of my box to cover my body and keep the illusion that my legs were the wolfs legs. I then started the put his mask together. the mask came with a brown nylon shirt with hair around the wrists and neck line. I cut out a big chunk out of the shirt and taped it to the neck and chest of the wolf. I took the hair and covered a portion of his chest with it so he would have some hair on his chest coming out of his shirt. This part would have been easier to do before I taped the shirt to the boxes and the boxes together but wasn't hard. The mask had a 1-2inch hole on each side of the head. I decided to use these holes to tape the mask to the sturdy cylinder. The hair covered these holes pretty well and taping it gave it extra security. I stuffed newspaper in the mask after taping it to fill. Newspaper is light weight and was a great filler!! I taped the back of the mask to the wolfs torso and taped where needed in the front. Some of the mask was taped to the torso in front but only in places that would be covered other spots were taped to the cylinder inside and I did tape a kind of strap to keep the newspaper in place so it wasn't coming out of the neck. Again, this whole part would have been easier before I taped the shirt and boxes together but wasn't hard. Next were his arms. I rolled up some cardboard piece to make 2 arms. I used my own arms as a guide to measure how big the arms should be. I found a pair of black gloves and used newspaper to fill the fingers and hands. I tapped the gloves to the arms and started to fit the arms into the sleeves. I filled some of the shoulders with newspaper and cut a small whole into my box where his forearm would be placed. I shoved some of the fabric from the arm of the shirt into the hole and taped with duck tape just to be sure to arms will stay in place. I taped the inside of the cuff to the box again just to be sure they stayed in place and covered with the gloves. I taped the finger tips of the gloves to the bottom of the box leaving his thumbs free for a more natural look. I did cut and taped a cardboard piece to the back of my box to cover all the duck take. I wore jeans that were to big because my womanly curves showed threw pants that fit. It took me a little longer to figure out who I should be. At first I was just gonna be me but... why would I be with a wolf?? I thought of maybe a pig and making 2 other pigs but wanted something simpler that I could wear to work. It then hit me!!! Little red!!! I found a red hooded little cape and uses bobby pins to secure it. I tucked my red shirt into the oversize pants to just ensure the illusion so no one saw my body parts and slid right into the hole and set the box under the belt. The box stayed on its own and I had no trouble keeping it on or fitting it on. The holes made were just for me to fit my body. If they were any bigger I would have had to make some type of straps and if it was any smaller I wouldn't have fit. I decorated the box just writing DINNER on each side using leftover paint from another project.


The mask, jeans and shirt were bought from goodwill. I could have gotten it cheaper on the right day. I used my own red shirt and make up for little red and the red hood was my moms from an old costume. And I found an old newspaper.

Took it for a spin at work!!

A lot of people were confused and I had a lot of people ask who was the wolf. I got a lot of stares and a lot of people just laughed. It was a favorite for both guests and other employees. I am the quiet one at work so for me to show up like this was a shocker. The bar was no different. A lot of people asked for pictures and it was a lot easier to dance in then I would have thought. A lot of people wanted a picture and a lot wanted to look inside to see if I was that little and wanted me to prove the were my legs. It held up all night and still looks great after a long night of trick or treating at the mall with the kids and hanging out with the grown ups later. I had a few people try to buy it off me and others that were amazed that I made it. Its defiantly going into storage for next year.