The Mad Hatter
by Jessica

The Mad Hatter
by Wendy 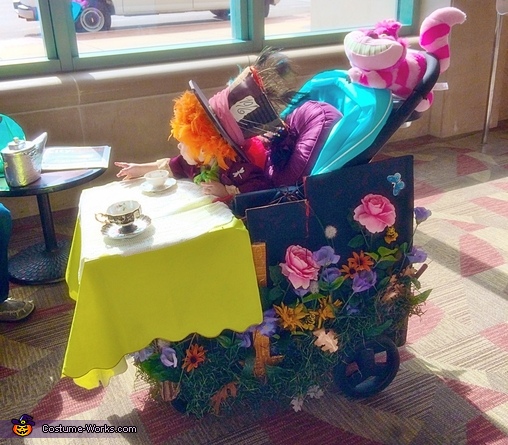 A word from Shawna, the 'Little Mad Hatter' costume creator:

The Little Mad Hatter is my son Mickey
My idea came from the fact that I wanted to use his stroller,being that right now he gets tired walking. I also took ideas from the cartoon Alice in Wonderland and from the movie Alice in Wonderland(Johnny Depp's character-Mad Hatter).
The tea party cart and his costume was made from a lot of repurposed items. I used a lamp shade,vintage kids clothes,artificial flowers/grass,different fabrics, feathers, ribbon, tape, glue and cardboard.
The Hat:
I cut out a brim for the hat from cardboard, I covered it with brown fabric and ribbon. I sewed different kinds of fabric around the lamp shade. I cut out a circle from cardboard, covered it with brown fabric and put it on one end of the lamp shade(for the top of the hat). I glued a few hat pins(I made out of beads)and a 10/6 tag(this was made from paper,I burned it to look old)on one side of the hat. On the other side of the hat I glued different peacock feathers to it. Then I wrapped the hat with a peach colored band. The band was made out of sheer fabric. I attached it to a baseball cap,to stay on his head better. I glued lots of orange feathers(for hair)on the baseball cap.
The Body:
I used a vintage kids suit jacket. I modified the sleeves with lace cuffs. I added patches(a dragonfly),like Johnny Depp's character. I also added a pin with different kinds of ribbon to one side of the jacket and a pink handkerchief on the other side. I made a sash out of travel size spools of tread and he wore a lime green sheer scarf as a bow tie. I shorten the pants and added striped leggings. I sewed a design into one of the pant legs. He wore black mittens(if it was cold)or just blue mittens cut in half.
The Tea Party Cart:
I cut up cardboard boxes,then spray painted them black. I then glued different kind of artificial flowers and grass to the bottom. I took the box parts and wrapped his stroller with them. I used green vinyl cloth and a large doily on the top, to look like a table. I glued two vintage tea cups and saucers to the top of the table. I added a stuffed white rabbit in a top hat, holding a pocket watch to the side of the stroller. On the top of the stroller I put a animated Cheshire cat. The cat would talk and the eyes would move.
Large Teapot:
I used a baby formula tub for the body. I glued a cardboard spout on one end, on the other end I glued a metal handle to it. On the top of the tub I put a plastic baby food jar and a small cap. I then spray painted it silver and added stickers for a design. I put some plastic caps inside the formula tub to make a rattle, this was also to keep him entertained.