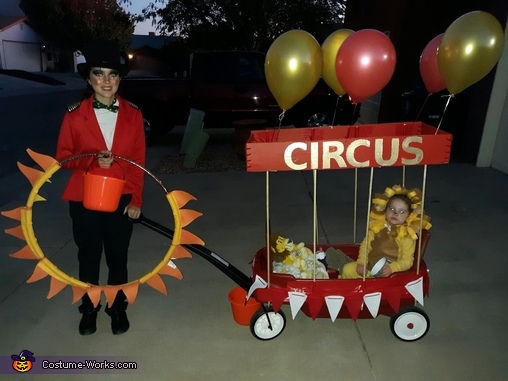 A word from Renee, the 'Lion Tamer and Lion' costume creator:

My 2 year old daughter, Natalie, became enamored with the Lion King earlier this year after hearing the soundtrack and when I asked her what she wanted to be for Halloween, she kept saying Lion King. I tried to think of a way to incorporate that into a costume she could wear and her older sister, Claudia, and I finally came up with Lion Tamer and Lion. The irony being that we are anti-circus because of the way they keep their animals in small cages.

We already had the black pants and white top, we found the hat and hula hoop stored in the garage so I just ordered a red jacket for $8 and the Lion Tamer costume was complete. Then I found a mustard yellow sweat suit at goodwill for a couple bucks and bought about $10 worth of yellow, gold, orange, tan, red and white felt. I cut out strips of the yellow, gold and tan felt and hand sewed them in loops on a piece of yellow covered elastic. Then I made ears stuffed with cotton balls, a tail and belly. I cut out red and white flags and wrapped them around the wagon, then I painted cardboard red, printed up letters, cut them out and spray painted the CIRCUS letters. Added a few balloons and it was complete, all for under $25, although it did take about 8+ hours to make. The girls were a hit everywhere we went on Halloween!!