Fish and Fisherman
by Tim

Fisherman in a Boat
by Jessi 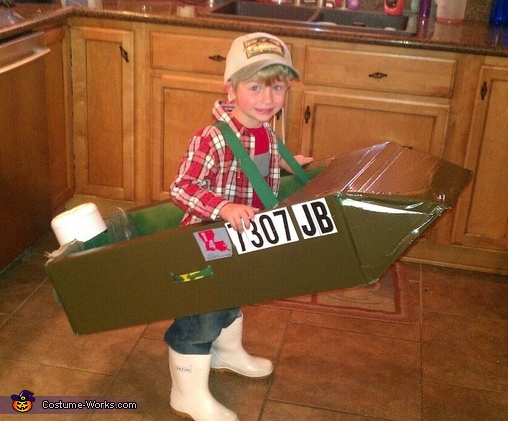 Lil Fisherman with his Trawl Boat

A word from Chantel, the 'Lil Fisherman' costume creator:

My son Jeremy is wearing the costume. When I asked him what he wanted to be, his response was "a green boat" his daddy has a flat boat that they go fishing and trawling in. We started with a large retangular box and transformed it into a little model of his dad's boat. It was cut, taped and painted green. Accents we added were the La sticker and license # (which I used his initials and bday), then his daddy made a boat motor out of a white plastic container and some foam pieces for the propeller. Next, I printed some photos of crabs and fish and added some plastic shrimp into a trawl net on the back. His outfit was just stuff we had around the house to look like a fisherman...a flannel shirt, red t-shirt, jeans and of coarse his shrimp boots.