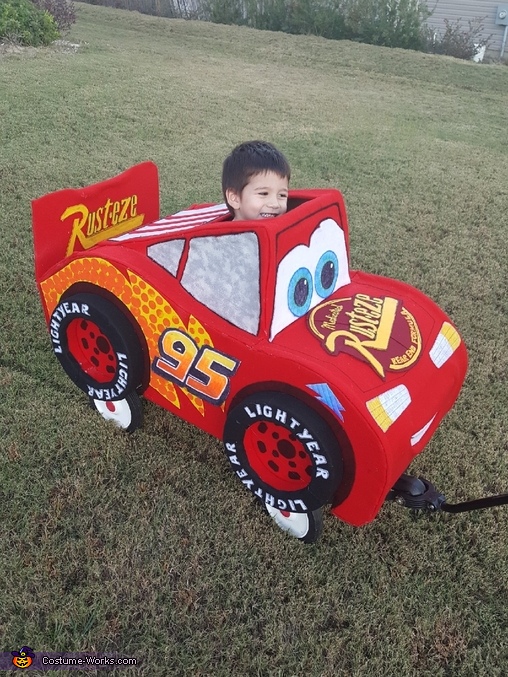 A word from Andria, the 'Lightning McQueen' costume creator:

Jonah, my three-year-old son, LOVES Lightning McQueen from the Disney Pixar movie Cars. I set out for inspiration online and came across an incredible rendition of a toddler-sized Lightning McQueen! I knew as soon as I laid eyes on it that I wanted to attempt my own.

His base is made from cardboard found behind Walmart. Thank you, Walmart, BTW! I drew and cut out the sides, made tubes for the inner skeleton, and connected all that with hot glue. I curved the top layer of his body by rolling it around the duct tape roll, and hot glued that on the sides/skeleton. Then I proceeded to draw, cut out, and glue on the spoiler. The last cardboard task was the cockpit which I drew, cut out, and attached the same way.

After his body was together, I made the mouth, and began to glue on red felt with spray adhesive. Lighting McQueen's eyes, headlights, Rust-eze sticker and logo, windows, lightning bolts, 95's, brake lights, etc are all hand made by eyeballing original stickers from photos online and drawing and cutting out with felt. I went through an entire can of spray adhesive putting on all that felt!

The wheels are made from foam rings and covered in, yet again, felt! I attached them to Lightning's body with hot glue.

This lofty project took time, dedication, and lots of burnt fingertips from hot glue! I worked on it on most of my days off throughout the month of October,but seeing my little man's face light up when he wore it was worth everything it took to finish this ambitious project. Needless to say Halloween was a blast! KA-CHOW! 😄