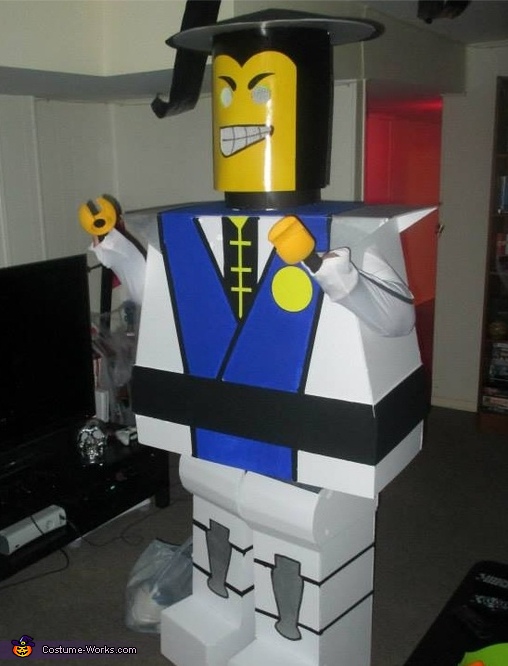 Get a photo of my good side

A word from Joe, the 'Lego Raiden' costume creator:

My Girlfriend wanted to dress up as Mortal Kombat characters, and I wanted to be a Lego figure. I compromised, and made a 7' tall Lego Raiden character. I wore it to a part where I met about 25 of her friends for the first time. I was so nervous, but I walked in, the party stopped, and nearly everyone there wanted a picture with me. I won best costume AND most original costume that night. The following weekend I went to another halloween party, and won best costume there, too.

It was totally worth the 20hrs of time to design, build, and paint it. 15 sheets of foam core, a length of sonotube, 5 containers of paint, 50 glue sticks, and 2 glue guns (overheated the first one) later, I had a fantastic, award winning costume. Hope you like it as much as everyone else did. :)

I even built some glow sticks into the eyes, since Raiden's eyes glowed in the video game. I'm only 5'8, so I was seeing the world around me from the costume's mouth.