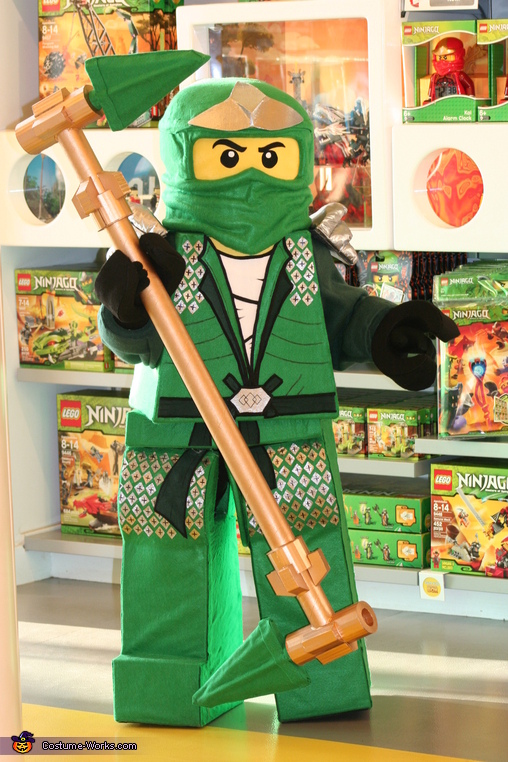 My son Alex is 7 years old and like most boys his age he loves lego especially ninjago. His favorite is the green ninja so thats what he wanted to be for halloween. I couldnt find the costume anywhere so my son asked if I could make it for him...I had no idea how I would make it since I had never made a costume before but I just didnt have the heart to say no.

I started with some cardboard boxes for the body, when I was happy with the shape I cover it with fabric and pieced the details on the front with fabric. The head is also made with cardboard and the details are made with foam and then covered in the same fabric (this was the hardest thing to make I had to cover it twice) the legs are cut out of foam and covered in the same fabric. His hands and weapon are also made with cardboard.

I regret not taking pictures of the entire process. He was a huge success in school, everyone wanting to take pictures with him and chanting "ninjago ninjago" as he walked by in the parade. We also went to legoland and got amazing compliments from people, my son had camaras flashing from every direction. Someone even said they thought he was a park character.

I had so much fun making this costume even though I stared at the actual minifigure for hours trying to figure out how to make it fit my son and still look like a real lego. I worked on it an entire month. Luckily I had started at the begining of september. The total money spent was around 70 dollars for fabric and hot glue (i used a LOT of hot glue)

Every second spent working on this was worth it when my son tells me "you're the best mom in the world" and I see how happy he is in his costume grabbing everyones attention. Thats the best thing for me.