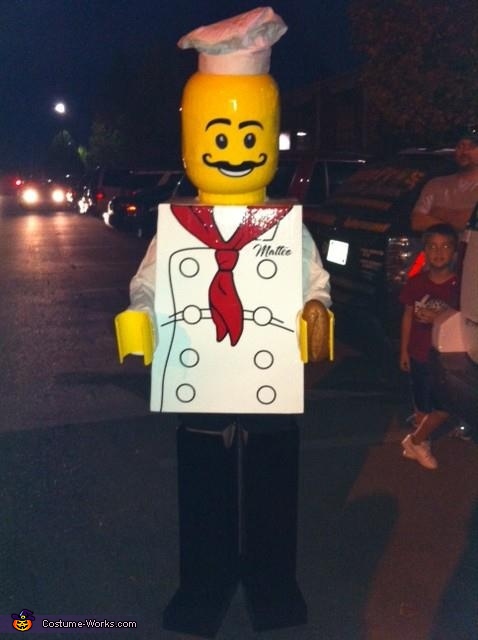 A word from Alyssa, the 'Lego Minifigure Chef' costume creator:

This was my second church costume contest costume (2011), and I was a Lego Minifigure Chef. The idea came from my little brother, Matt, who passed away from a brain tumor earlier that year. His two favorite things in the world were Lego's and cooking! So I figured, why not combine the two and have a super fun costume that also pays remembrance to him.

My dad helped a lot with this one, it wouldn't be nearly as cool as it is without him. The Lego head is made out of two plastic candy bowls, styrofoam, vinyl, and screen netting (for the eye holes). The torso and legs are made out of cardboard, masking tape, and vinyl. The hands are made out of pvc pipe and vinyl. I wore a white long sleeve shirt under the torso and black pants under the legs. *Paint can easily substitute for vinyl.
** I wouldn't recommend this costume for big, crowded parties. It was really hard to walk and see at the same time!

I won the contest the second year in a row! It was a super fun costume and I loved that I got to honor my brother at the same time :)