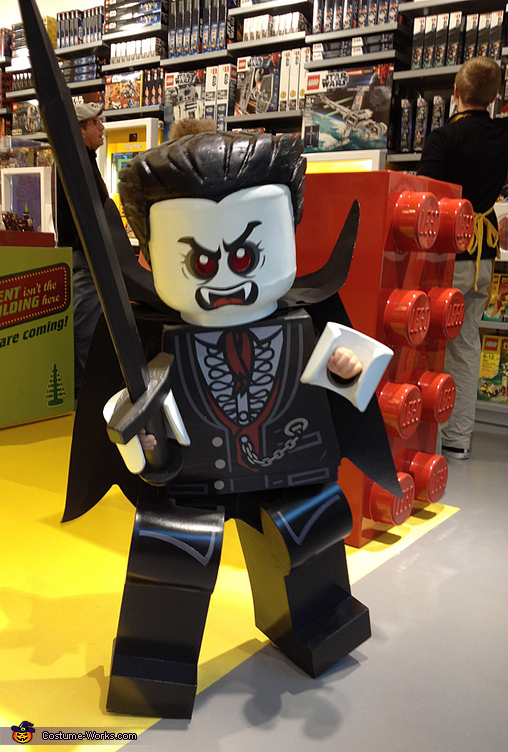 Lord Vampire at the Lego Store

A word from Keith, the 'Lego Lord Vampire' costume creator:

A big fan of Lego Monster Fighters, my 5 year old son decided he wanted to dress as Lord Vampyre, ruler of the Monster Realm.

The costume was created using 2 main materials. The majority was constructed using a low density PVC foam board called sintra. The hair and beveled ring around the head was sculpted with standard styrofoam found at your local building supply store. Outdoor fabric was used for the cape and collar, while elastic fabric and velcro were used for the leg straps.
The legs and torso panels were cut using paper templates I created from a scaled drawing of the mini figure. Curved sections were achieved using a heat gun but simply applying heat to eh sintra and hand bending. Panels were glued together using an industrial adhesive called E-6000. Once dried, I scraped any excess glue around the joints and filled them with automotive bondo. I then sanded the bondo to create a seamless look. The parts were then painted with spray paint.
Using the same principal for the head, the sintra was curved by applying heat until the cylindrical shape was achieved. Styrofoam was cut and glued around the bottom and shaped to achieve the bevel. I stacked styrofoam pieces together and glued with PL Premium before carving the hair. The hair was carved with an x-acto knife an the occasional use of a rasp. The only tools I used for this costume were 2 types of x-acto knives, a metal ruler, pencil, heat gun, clamps, scissors, rasps and my computer.

The facial and body graphics were drawn in Adobe Illustrator and printed on adhesive vinyl.