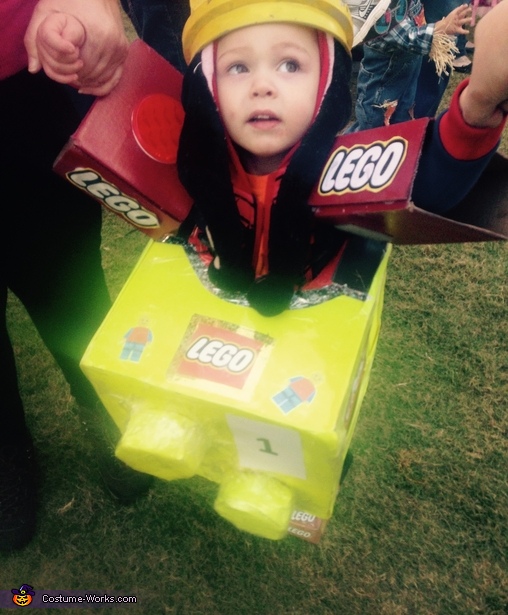 A word from Laura, the 'Lego Toy' costume creator:

My son Jaxon is wearinf my costume, he is 2 years old. I was originally going to make the costume for my oldest boy , Jaylen is 6 years old, but he wasn't sure if I would be able to pull it off. After seeing what I did for Jaxon, he said next year I can definatelty make his costume. I impervised and used creativity! I used poster board, tape, glue, moving boxes and 2 small boxes that trash bags come in (for lego shoes), spraypaint, a paint bucket, and a computer and printer.
I did a lot of impervising and adjusted things as I went....
The best part about making this costume for Jaxon is thr memories and the time we spent together making it. My oldest son helped me and Jaxon helped too. That was worth the time and effort that was spent making this costume... AND THAT IS WHAT YOU CALL PRICELESS!
I am a single mom of 2 boys and my time is consumed by work and school.. responsibility....We were able to bond more and haved fun, and I was able to show them creativity and imagination.... It's importantr to never lose your imagination.... life is too short to be so serious all the time.... We had a blast.