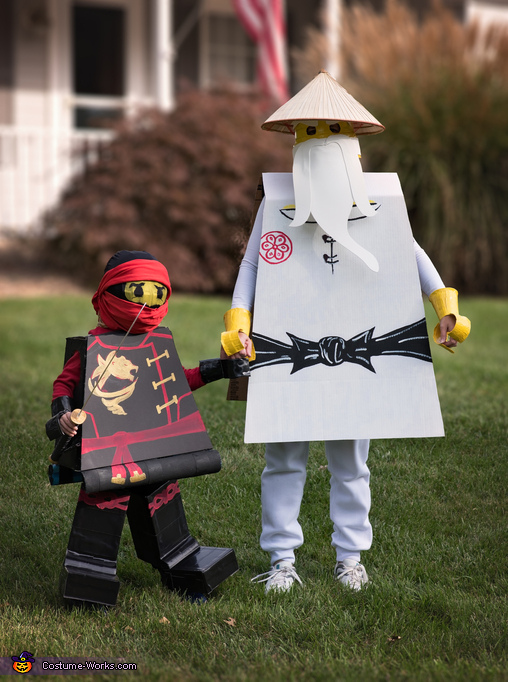 A word from Hanna, the 'Lego Ninjago' costume creator:

This is my son wearing the costume. He loves Lego Ninjago and wanted to be Kai for Halloween. We love DIY costumes, so we set out to make it ourselves. I cut out and taped a box with duct tape for the top of his costume and hand-painted it. I used velcro to attach the box together, for ease of putting the costume on and taking it off. I made the legs/feet out of boxes and duct tape as well and attached elastic to put around his shoes to keep the legs on. For the claws, I used plastic cups with duct tape wrapped around them. I left a hole in the middle, so my son could put his hand through it. I used his hockey helmet for the mask. I got a see-through, black mask and put it over the top of the helmet. I painted it yellow, leaving the eyes and eyebrows black. Then I tied a red t-shirt around it to make it look like a ninja. I made myself a Sensei Wu costume to go with it out of a box. I used a bucket with yellow duct tape for the head and cut a beard/mustache out of foam and glued it to the bucket. I wore a straw hat on top.