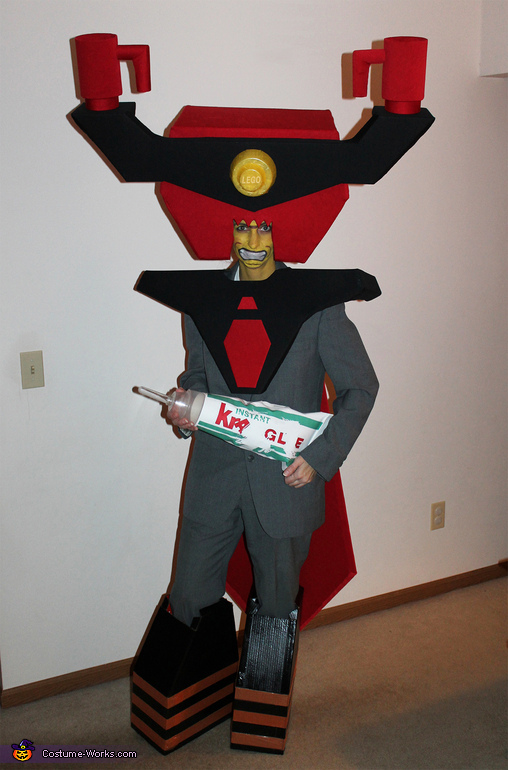 A word from Debra, the 'LEGO Lord Business' costume creator:

I feel like an 8-year old trapped in the body of a 42-year old. I LOVE Halloween and I LOVE Legos! Every time I see Lord Business, I crack up over his unbelievably large coffee cup helmet! After seeing “The Lego Movie”, I knew exactly what I wanted to be for Halloween, even though I knew it would be quite a challenge to replicate that enormous head.

This costume was made mostly out of cardboard, duct tape, glue (Kragle), and some donated fabric from my mother. Oh yes, and a lot of imagination (I only found one other Lord Business homemade costume out there to draw inspiration from.) The total cost for this project was around $10, and it took me roughly one month to create it.

First of all, I found the perfect grey suit at Salvation Army for $5. Then I started out with an empty cardboard box from my TV to construct the main part of the helmet. (Cardboard origami turned out to be a lot harder than I thought!) I measured, folded, cut and taped the cardboard until I achieved the shape I wanted. I then covered the entire thing in red fabric, gluing it in place with my glue gun. I used the same technique to shape the black part of the helmet and the shoulder piece.

For my favorite part, the coffee cups, I used two oatmeal containers and four toilet paper rolls for the handles. Finally, two plastic containers covered in yellow newspaper bags with the LEGO logo on it was the finishing touch to the helmet.

Getting the helmet to balance on my head was the most difficult part. I ended up inserting a giant Twizzlers plastic container that my head fit snugly into on the inside of the helmet. I then added a ton of bubble wrap around the plastic container to help secure it and make it as comfortable as possible.

I used a light-weight cardboard to fashion the cape, covered it in the red fabric, and used velcro to attach it to the back of the shoulder piece. Cardboard boxes were used to make the legs, along with some black spray paint and orange newspaper bags. Lastly, the “Kragle” was made out of paper, poly-fill, and 3 plastic containers.

I wore my costume to my son’s elementary school to watch their costume parade, and then help out with the class party. It was very amusing to see the students spot my huge head, do a double take, and then stop in their tracks with jaws hanging open as they took in my costume. The looks on their faces, and their excitement made all the time and effort spent creating this costume totally worth it!

On Halloween night, my family and I walked around the mall to trick or treat. I have never been stared at so much in my life. Several parents placed their children next to me to take pictures. It was so fun to aim my “Kragle” at the kids and have them pretend to get stuck in place. Overall, I was very pleased at the finished product, and thrilled that the kids all seemed to like it. “Everything is Awesome!”