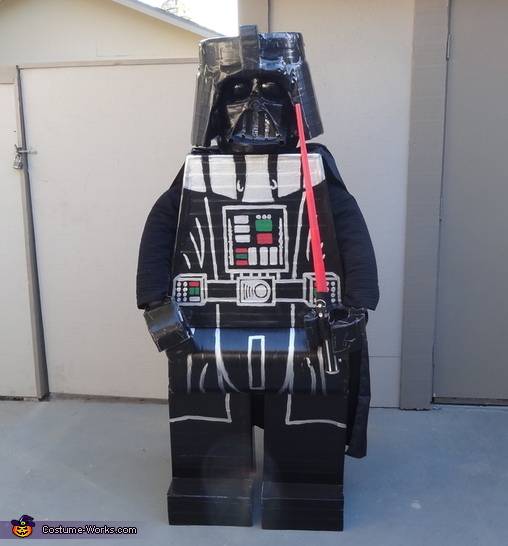 A word from Daniel, the 'Lego Darth Vader' costume creator:

My name is Daniel and I created a Lego Darth Vader costume for Halloween 2014. Brief background, I work at a real estate company and prior to becoming an agent, I was working in the graphic design/marketing department. One of my colleagues happen to ask me how it was like being on the "Dark Side" and that comment alone spurred the idea. Being on the "Dark Side" is an inside joke in out company that the staff use to describe the sales agents.

Now, for the breakdown of the costume. As for materials, I used about 8 rectangular poster boards purchased from a local Office Depot. It just so happened to be closing, so I got a good deal on the materials. The poster board served as the structure of the legs, mid-section, and torso. I needed heavy duty scissors to do the cut-outs.

The mid-section is a combination of a half-cut circular concrete mixer tube that I came across when walking through Home Depot. Poster board was used to connect the parts as an enclosure.

I used 7 rolls of black Gorilla duct tape from Walmart to wrap all the pieces up for a consistent black sheen color throughout.

The hands are made from styrofoam flora I purchased from the 99 cent store. They came in a perfect circle shape and I had to tape two of them together and cut out a third of circle to create the familiar Lego hands.

I bought a black jacket from Goodwill Store that had a nice square texture design on it and was a perfect fit to complement the costume.

I purchased a Dracula cape and toy Light Saber for props from a store called Spirit Halloween.

A light saber App purchased from iTunes on my iPhone duct taped to the light saber helped create the familiar light saber sounds effects when swung.

I used acrylic paint to add the details on the torso, mid-section and legs of the costume.

The hardest part of the costume was creating the iconic Darth Vader face. It was a combination of many components that took a bit of ingenuity and creative engineering to get just right. The helmet was formed from a mini wash bucket purchased from Walmart. Parts of the helmet were accentuated with left over poster board to create shape. I used a small shop saw to cut into the was bucket to create the opening for the face. I used a mini waste basket purchased from the 99 cent store to serve as the neck for support when I put the Vader helmet on. The triangular nose/mouth was created with LED solar lawn lights purchased from the 99 cent store and strips of Gorilla Duct tape to hold in place. The eyes were created from two soup ladles purchased from the 99 cent store. I had to break the handles off the ladles, but the circular form worked well. I used my wife's black nail polish to paint the eyes black for that reflective black aesthetic. The cheeks were formed from the corner of Kleenex tissue boxes. And finally, the eye rims for the brow were shaped with play-doh and held in place with Gorilla duct tape.

I was very excited to see how the costume developed from design concept to full execution. Overall, I think I spent about $168 in raw materials, plus invested about 16 hours of time over a weeks time. The end results came out better than I had anticipated. I am glad I was able to share how I created this Halloween costume on this website.

Here's a fun link with my co-worker: https://www.youtube.com/watch?v=8Mq0yC9lxCE